If you are looking for a toaster oven for outdoor adventures or for saving up on energy bills, then you need to consider looking in to the best low wattage toaster ovens.

These toaster ovens are generally inexpensive, small and have a low amp rating. Hence the facilities to require to operate these is generally quite low.

You can hook these up to a small generator, place them on a compact shelf in your kitchen or use them for your quick morning breakfast, low wattage toaster ovens are great for those with limited and specific needs.

In this article we will look at what constitutes a small toaster oven.

Whether you want to take it out for camping or if you just want and energy efficient appliance in your kitchen, then we highly recommend this.

Besides the basic broil, bake and toast functions as you would expect, this toaster oven adds one additional functionality: keep warm. This may come in handy when you want to keep freshly cooked food fresh for a longer time.

This toaster oven consumes a low 1300 watts despite the fact that it is larger AND also features the convection fan.

The following toaster ovens stand out the most in terms of low energy consumption.

If you are looking for a toaster oven with the least possible power rating for a 4 slice size, then this is the best low wattage toaster oven, hands-down.

In fact, this toaster oven is very popular just for that reason.

This toaster oven is as minimal as it gets. It does have a chamber that is shaped in a way so that it facilitates hot air regulation evenly, but it does not have an active convection feature.

This toaster oven has a rated power of 1100 watts, which is among the lowest for its class.

This type of wattage is even hard to find in smaller 2 slice toaster ovens. Therefore to find it on a 4 slice, somewhat larger, toaster oven is a quite a blessing.

Therefore, whether you want to take it out for camping or if you just want and energy efficient appliance in your kitchen, then we highly recommend this.

As far as the food is concerned, it can fit a small chicken or about a 9″ small pizza. Therefore, this is suitable for very small meals. 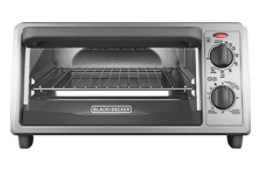 This yet another very low wattage toaster oven like the Mueller above. However, it is rated at 50 watts above the previous oven with a rating of 1150 watts.

However, while it does have a marginally higher wattage rating, it is also cheaper than the Mueller oven above. Therefore, there is a trade off.

As far as the features and size is concerned, both the ovens are more less the same. This oven is slightly wider and therefore should be able to accommodate a wider tray. The height is almost the same.

Features wise, this also does not offer a convection fan. Therefore, it is a simple regular oven good enough for toasting and preparing small meals.

It does have the basic broil, bake and toast functions as you would expect. On top of that it adds one additional functionality: keep warm. This may come in handy when you want to keep freshly cooked food fresh for a longer time.

It should be noted that this is also a highly reviewed and a popular item.

All in all, if you are looking for a highly affordable option, then this is the best low wattage toaster oven in our opinion.

This is unlike any other toaster ovens in this list. For starters, it is much larger than the previously two mentioned above.

However, the real beauty of this toaster oven lies in its control. This is a digital toaster oven and therefore gives much more precise control over your cooking.

The best part is it consumes a low 1300 watts despite the fact that it is larger AND also features the convection fan.

Sure it is much more expensive than the two toaster ovens above, however, if you are looking for a highly functional option for proper home use, then this is the best low wattage toaster oven in our opinion.

It can handle a good portion of meals at a time for you.

Instead, this feature the simple manual knob controls with the class roll top door.

It should be noted that this isn’t entirely the option if you are looking for the least wattage. It has a decent 1400 Watt power rating.

This is actually considered a mid-low power rating range for toaster ovens. As such, if you need to reheat or cook your food fast, this will enable you to do so while also maintaining a relatively low energy consumption.

As far as the size is concerned, this is a midsize toaster oven with the capacity to handle 6 slices of bread or about a medium size pizza with a 12 inch diameter.

Furthermore, it also offers the convection fan feature, which many find essential for certain cooking styles.

In short, if you are looking for a mid-range model with a decent capacity, then this is the best low wattage toaster oven in our opinion.

Oster TSSTTVDGXL-SHP is a fairly large toaster oven. You should be able to tell that by its capacity to handle two racks at a time.

Therefore, it is naturally going to have a higher power rating. As such, this toaster oven has the highest power rating in this list of 1500 watts.

The reason we have selected this because it is in fact quite energy efficient. While it may seem too much, 1500 watts is in fact a mid-power range for toaster ovens. The high end models are rated at at least at 1800 watts.

Compared to those, this is actually a fairly decent deal.

It is a digital toaster oven and thus comes with preset modes as well as buttons for setting the precise cooking time and temperature.

Of course the real attraction here is the size. This can accommodate 18 slices of bread or two 16″ extra large pizzas.

Therefore, if you need a spacious option then this is the best low wattage toaster oven in our opinion given its size.

What is a Low Wattage Toaster Oven?

A low wattage toaster oven, as the name suggests, is a model that has a low output power rating.

A low output power rating pertains to a few things:

A device with a low wattage rating means that it would have a low amp rating as well.

This means that the size of the cable / extension you need or the size of breaker you need to operate it would naturally be small.

Also Read: Can You Plug a Toaster Oven Into an Extension Cord?

Since these are specifically designed for smaller cooking chambers, they are efficient for smaller food portions.

Hence a toaster oven with low power rating can reflect well on your overall energy bills.

In order to operate a low wattage toaster oven, you need a small electrical source i.e a small generator.

This is particularly helpful if you are camping because that way if you have a small generator, you would be able to use the toaster oven effectively.

While low wattage toaster ovens come in various price ranges, there are few common attributes you can find in these. 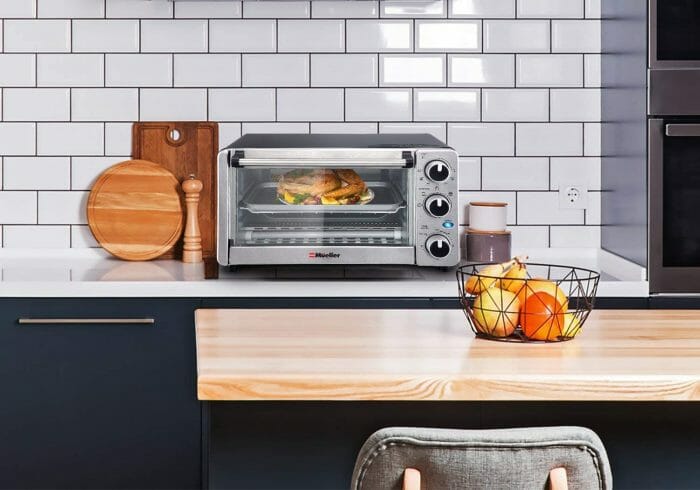 The lower the wattage, the smaller is generally the size of the toaster oven.

This makes sense because in order to cook food properly, enough heat has to be generated. If the cooking chamber is large but the wattage is low, then the heat will be regulated properly.

The bigger the cooking chamber, the faster the heat dissipates. A low wattage toaster oven would not be able produce enough heat to balance out the dissipation. 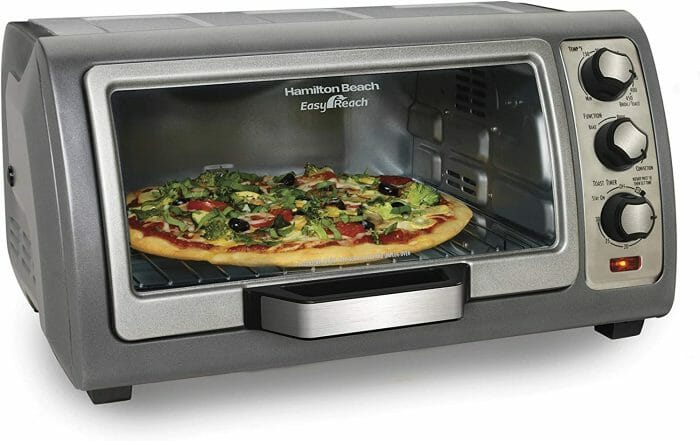 They have simple knob controls for selecting temperature, heating mode, and timer.

If you want to have additional features, particularly the convection fan feature, then the toaster oven would mostly have a higher wattage.

Convection feature, for those of you who are not aware, adds a fan inside the oven that allows the heat to be circulated thoroughly inside so that the food heats up evenly from all sides.

Takes Longer to Heat Up

A toaster oven with a low power rating takes longer to heat up. This is logical because the heating elements take a longer time to reach the desired temperature.

Most of the toaster with a low wattage cap out at 450 Degrees Fahrenheit.

If you need broiling temperature setting of 500 degrees Fahrenheit, then not only would the oven has a high wattage rating, it will also be expensive.

Here we reviewed some of the best low wattage toaster ovens with a reasonable capacity, fair price tag and favorable customer reviews.

While the least powerful toaster ovens above may take their time to cook or to reach desired temperatures, they are great at conserving power.

The lower the power rating, the smaller is the food portion that they are suitable for.

1. What are the best low wattage toaster ovens?

List of Best Low Wattage Toaster Ovens that we tested.
The following toaster ovens stand out the most in terms of low energy consumption.

2. What wattage is good for a toaster oven?

According to industry representatives, a toaster oven consumes approximately 1/3 to 1/2 the energy of a conventional electric oven when cooking small meals. A toaster oven's typical power consumption while in use is between 1,200 and 1,400 watts.

3. How many watts does a small toaster use?

The wattage of a small toaster oven is approximately 1200 watts.

A toaster is a common home appliance for toasting bread and heating certain pre-baked toaster pastries. When in use, the bread toaster consumes between 800 and 1500 watts of energy; an average toaster consumes around 1200 watts.

In the United States, an average microwave consumes 1000 watts and a toaster oven consumes 1225 watts. This means that the microwave is already ahead of the toaster oven in terms of energy efficiency, as it consumes approximately 20% less power. They consume approximately 33% to 50% less energy than a conventional electric oven when cooking small meals.

5. How do you broil in a toaster oven?

Preheat the toaster oven to broil. Close the door and place your bread in the center of the rack. Broil the toast for 1 to 2 minutes, then carefully flip and broil for an additional 1 to 2 minutes.

Check out these articles below

How Long To Sous Vide Tri-Tip? | Our Tips For a Delicious Meal!

How Long To Sous Vide London Broil | Awesome Tips in One Simple Guide!