Are you lost on which one to buy between a food processor Vs. mixer?

Well, you are not alone as many people are confused about which one is better between the two kitchen appliances. The confusion is not surprising as the functions of the two kitchen appliances are close to each other if you use the right attachments. However, they both have their qualities and functions, and it will help you understand them before you decide which one to buy.

So, what's the difference between food processors and stand mixers, and which one should you buy?

What Is a Stand Mixer?

A stand mixer is a kitchen appliance used for beating, kneading, mixing ingredients. It comes in handy in making bread dough, cakes, pies, and other bakings.

If you like making cakes, a stand mixer comes in handy as you can use it for kneading, mixing, and beating all types of dough and batter.

A stand mixer consists of a fixed stand with a lever-operated arm, also known as a tilting head. It also comes with one or more mixing heads and a removable bowl. 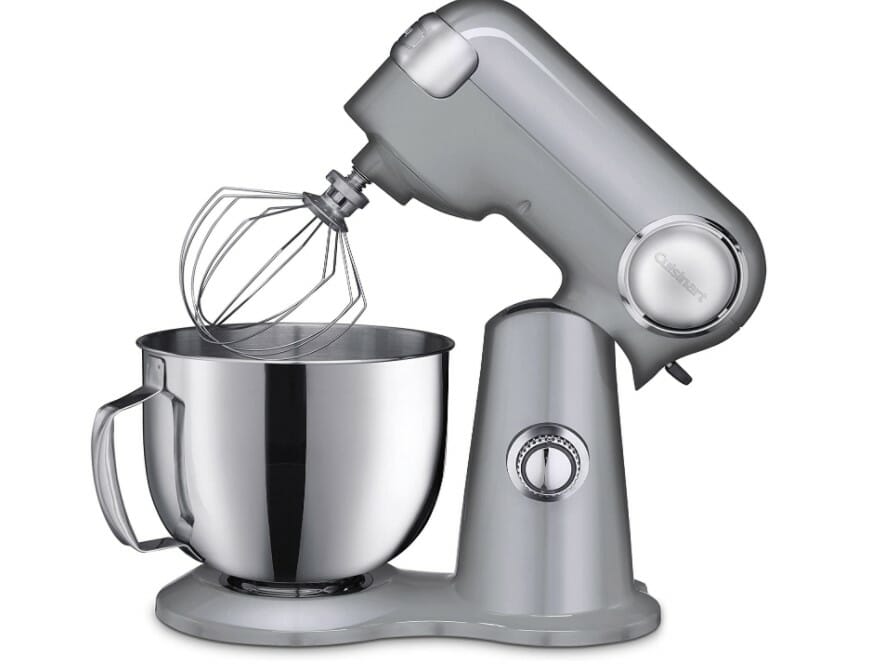 The kitchen appliance works when you fix the mixing head on a gear mechanism that then mixes the ingredients for you. Most mixers have various mixing speeds, which allow you to control the texture of the final results.

If you want to use a stand mixer, add your ingredients to a bowl and then attach the bowl to the stand. Next, choose the right mixing head, attach it to the lever-operated arm, and select your preferred speed to achieve the best results.

You may come across some stand mixers known as planetary mixers. In this type of mixer, the bowl and the mixing head move synchronously in a planetary-like motion, which helps to mix your ingredients better.

Planetary mixers are also more expensive compared to their alternatives.

If you want to buy a stand mixer, there are some factors that you should consider. 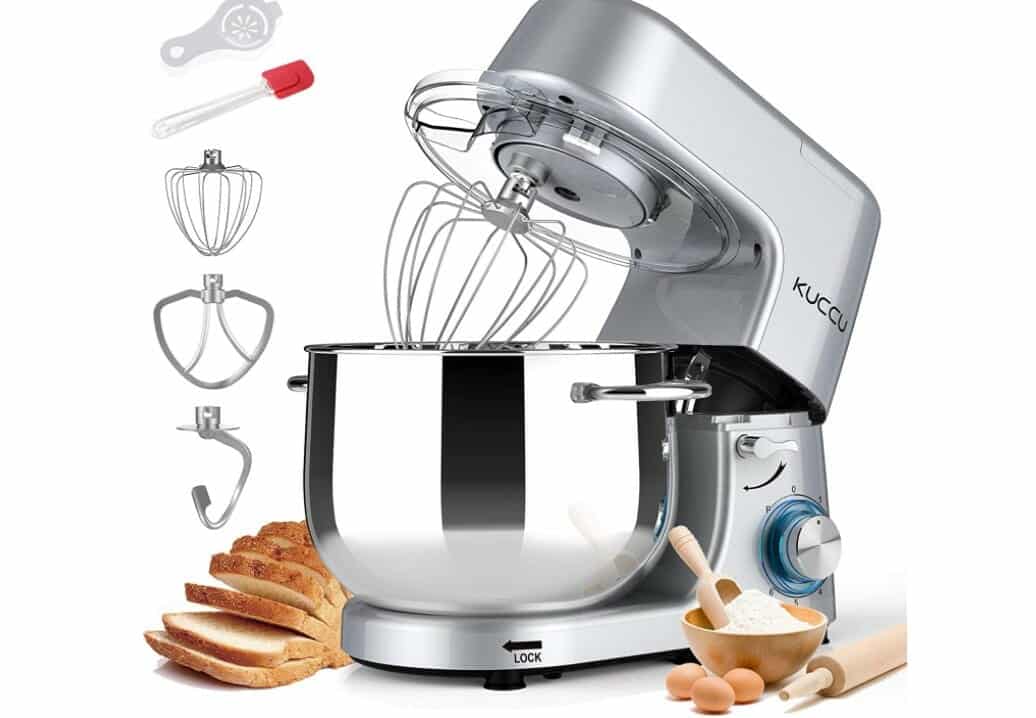 It will be best if the mixer has an extensible stand. This offers you flexibility as you work on your ingredients. If you need a stand mixer to prepare different recipes, ensure you go for one with multiple mixing speeds. This ensures you can control the speed to achieve the desired texture for all of the ingredients.

Mixing can be a power-consuming process. As you look for a stand mixer to purchase, it will be best to go for one with at least 250W of power. 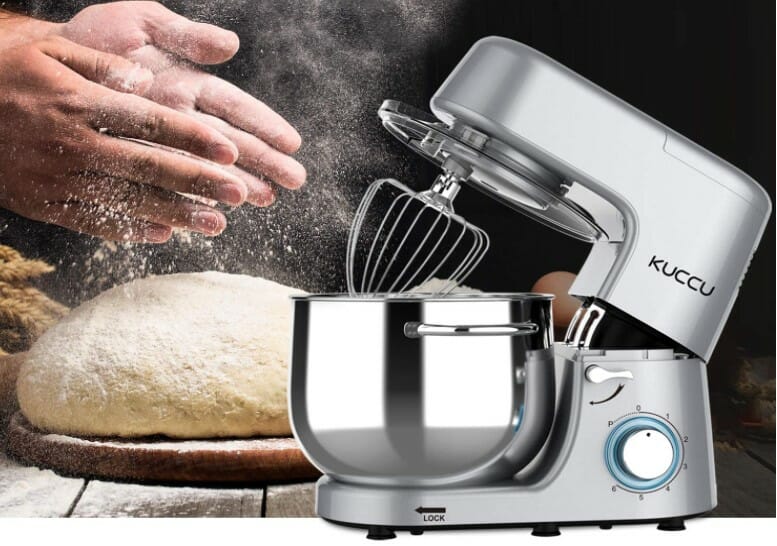 If you like baking bread, pizza, pasta, etc., at home, a stand mixer is the perfect kitchen appliance for you. It is also an excellent choice for making desserts such as pastry and creams.

Some stand mixers come with special chopper and blender attachments.

The attachments help to take care of the grating (see best processor reviews for that), chopping and cutting work. This helps you to extend the possibilities of a stand mixer.

What Is a Food Processor?

A food processor consists of four primary parts, which include a motorized base, bowl, lid, and blades. The controls on the motorized base help to set the right speed and pulse for the task depending on the ingredients. The various blades help in performing various tasks, such as grinding meat, slicing vegetables, dicing onions (see 'Best Food Processors for Dicing' post), etc. 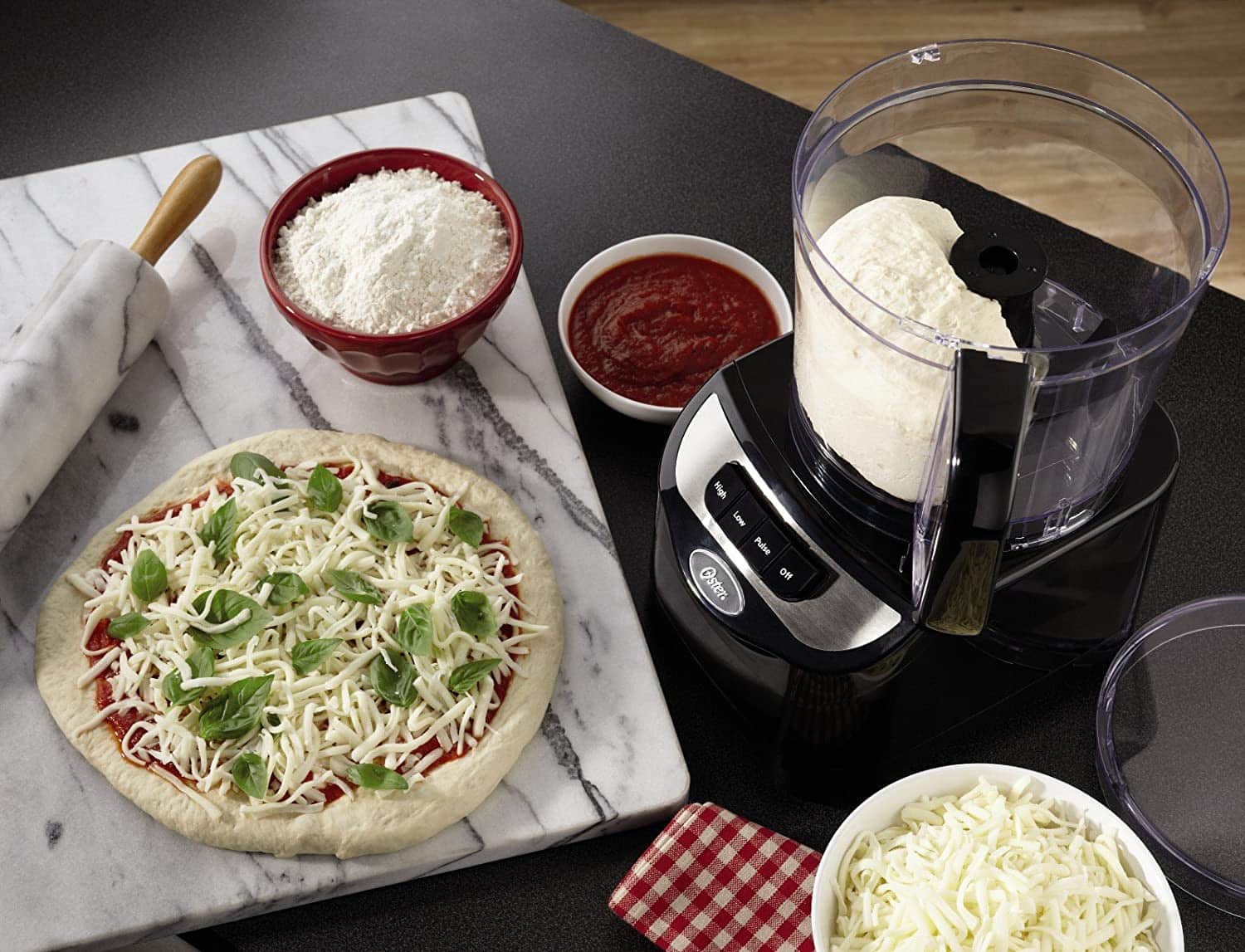 You can look at a food processor as a knife and a blender combined into one powerful kitchen appliance. Unlike a blender, a food processor requires little to no liquid to work well. Unlike a chef's knife, the processor does all the cutting for you and saves you the trouble of doing it manually, which saves you a lot of time.

If you prepare food daily for a large family or you do it multiple times a day, a food processor is the perfect appliance for you.

If you want to purchase a food processor, it will be best to avoid the cheap ones from unknown brands or the used ones. It may end up breaking quite quickly or becoming less functional than expected.

If you want to buy a food processor, there are certain factors you should look out for.

For example, the best food processor should come with a motor of at least 600W of power. This ensures the motor is powerful enough to handle a variety of ingredients. 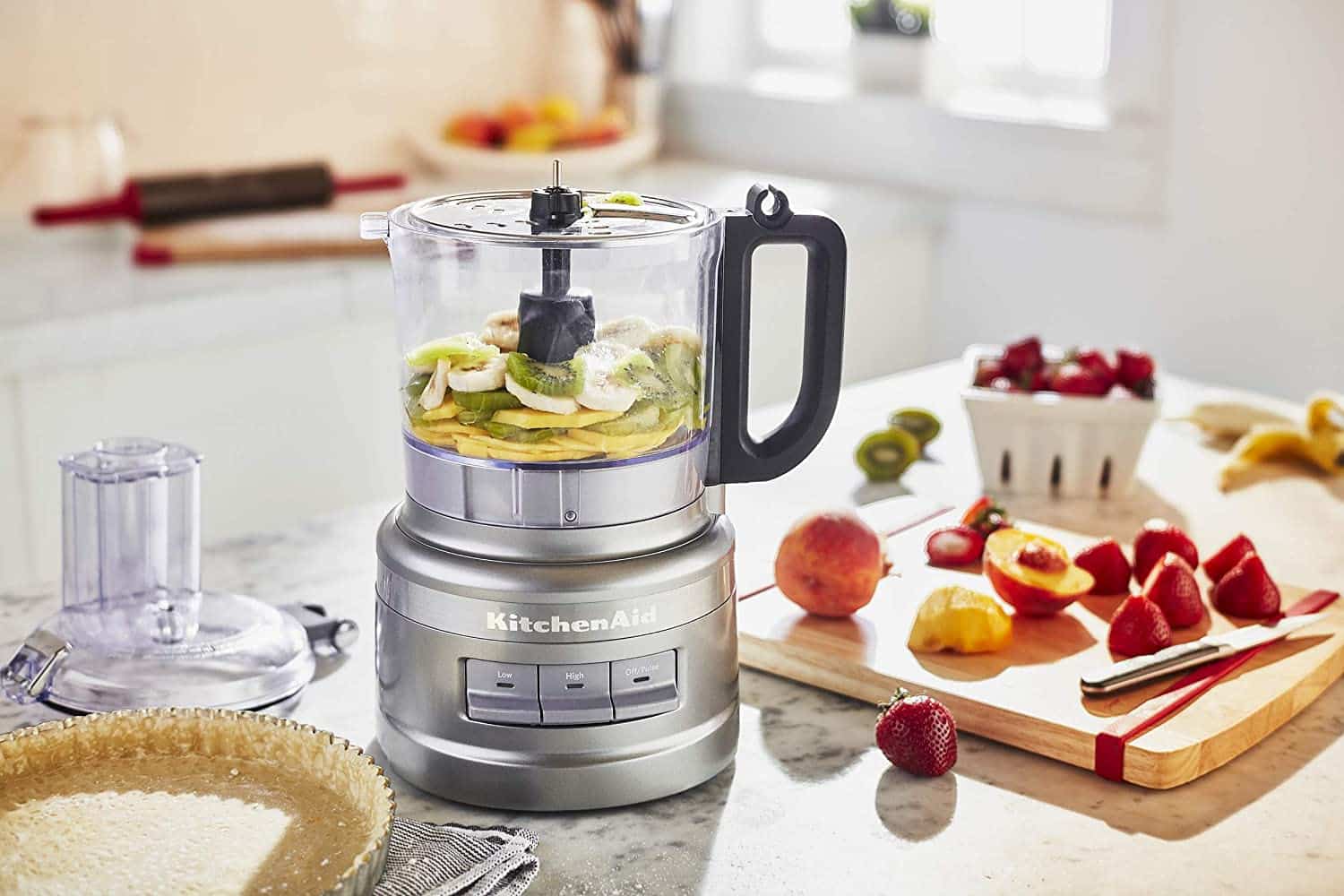 Additionally, a food processor should be a versatile kitchen appliance. As you look for one, ensure it comes with various blades that enhance its versatility and enable you to perform various tasks. Also, ensure the bowl has enough capacity to prepare ingredients for your day-to-day use or enough for your whole family.

It would also be best if you go for an extended warranty, especially for the tools you use the most. Most food processors come with two or three speeds. It would help a lot if you could get a food processor with more options.

All the parts of the food processor that come in contact with the food should be dishwasher safe. As such, you can throw them in the dishwasher after using the kitchen appliance to keep them clean and avoid food from sticking.

Can a Mixer Replace a Food Processor?

A stand mixer whips up ingredients and kneads dough for you.

A food processor carries out various tasks, including cutting, chopping, blending, slicing, and dicing instead of you doing it manually.

Though some attachments contain attachments that help you substitute one for the other, you may not interchange a mixer for a food processor.

For instance, you can use a food processor to mince meat, blend soup, and cut vegetables in a short time, thanks to the high speed of its blades. Such tasks may not be what you are looking for when you knead dough and mix it. 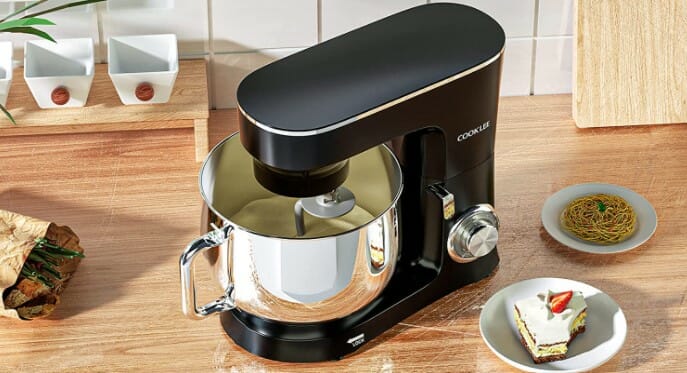 If the dough is too tough, it may make the motor burn.

Both the food processor and the stand mixer can be useful appliances for your home kitchen. However, most of them may tend to perform various tasks. For instance, a mixer would be the best pick for making pizza dough, while a processor will help you crush ice.

How does a food processor compare to a stand mixer? And which one should you buy for your kitchen?

Additionally, you can use a food processor to make dough faster. However, nothing can compare to the convenience and the best control of using a stand mixer to mix the dough. Therefore, a stand mixer is the best bet for making dough, especially if time and speed are of the essence for the recipe, and most of the time, they are. 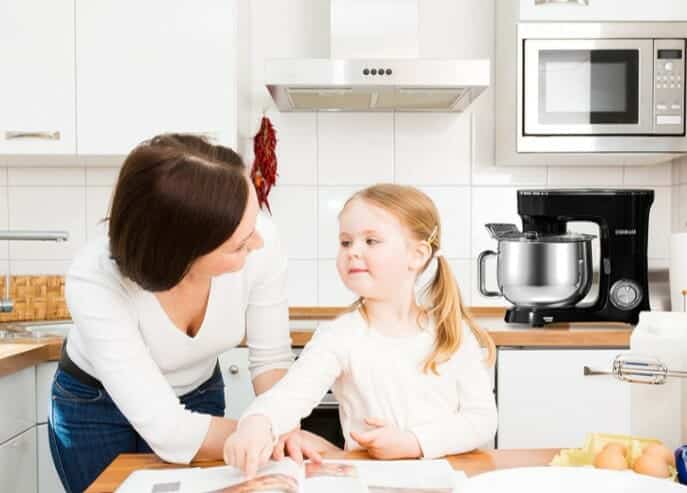 Sometimes, you may come across an appliance maker who promises to sell you an all-in-one device that will combine the tasks of a food processor and those of a stand mixer. As much as the deal seems like an irresistible one, you shouldn't be fooled into falling for the trick.

Apart from the very expensive devices, other such devices don't perform as you would expect.

But which one between the two kitchen appliances should you get for the various tasks?

Although an appliance may come with an attachment that helps in carrying out various tasks, the two devices cannot be used interchangeably. A food processor is an excellent pick for tasks such as dicing onions, grinding meat, shredding vegetables, slicing, chopping, etc. Although you can use a food processor to make and mix the dough, it may not do an excellent job. On the other hand, if you want to make dough for baking cakes, pizza, etc., a stand mixer is the tool for you.