Does Microwave Cause Cancer? | A Detailed Answer to This Often Asked Question

Also, The Food and Drug Administration (FDA) regulates microwave ovens, and they require all ovens to meet certain safety standards that prevent harmful levels of radiation from leaking out of them.

This article will take an evidence-based look at whether microwaves cause cancer or pose other health risks.

It's hard to imagine life without microwave ovens. You can reheat almost anything in seconds and cook some foods as quickly as a conventional oven. But how does a microwave work? What makes the food get hot so fast?

Inside the microwave oven, there is a magnetron that converts electricity into microwave energy. 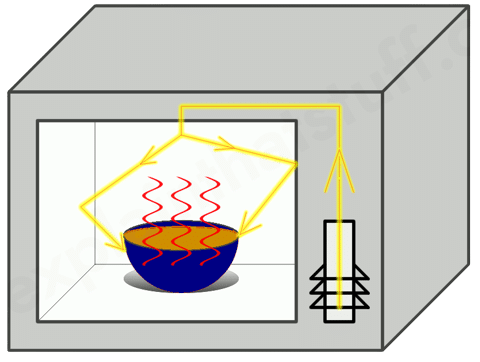 When you use a microwave, it sends out microwave radiation that gets absorbed by water molecules in the food you’re cooking or heating up.

The energy from these microwaves causes the water molecules to vibrate and collide with each other at a rapid rate which generates heat. This heat energy, in turn, cooks or heats up the food from within.

Is it Safe to Use Microwave Ovens?

You can feel safe standing near a microwave oven; the radiation levels are too low to be harmful.

No, microwave radiation is not harmful. A Microwave oven is an important kitchen device and a wonderful time-saving device. Yet, there has always been some question as to whether or not they are safe.

The idea that microwave ovens cause cancer comes from the belief that is microwaving food results in the formation of carcinogens. This concern is based on the fact that, like other types of radiation, microwaves can affect the structure of molecules. 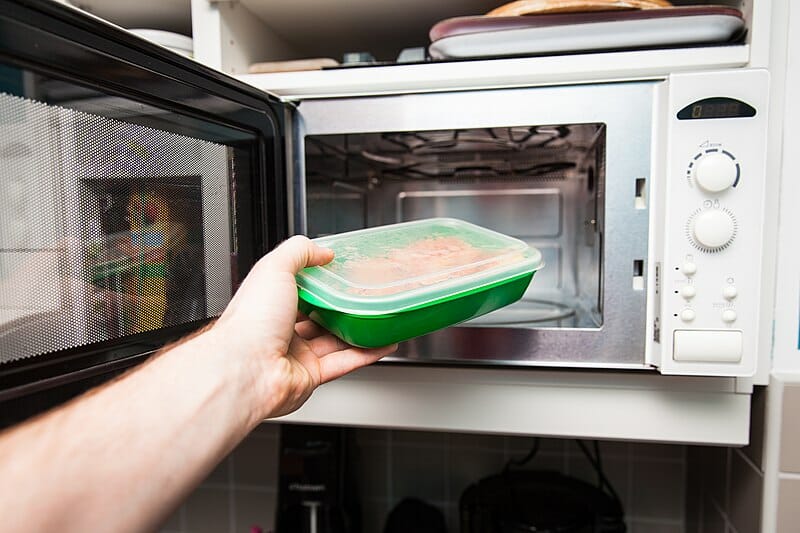 When it comes to food and exposure to radiation, only ionizing radiation is of concern. Ionizing radiation has enough energy to alter atoms and molecules, changing their chemical structure and potentially causing cancer by altering DNA.

Microwaves are non-ionizing radiation, which means they do not carry enough energy to damage DNA or cells. They can only heat substances that contain water or fat. These kitchen devices only emit microwave radiofrequency radiation when they are on. When the oven is off, there is no microwave radiation present.

Exposure to ionizing radiation typically occurs in the form of high-energy waves or particles. Sources include X-rays, gamma rays, and some ultraviolet light (think tanning beds). Other sources of ionizing radiation include particle accelerators like those used for cancer treatment and nuclear reactors.

By contrast, microwaves are a type of electromagnetic spectrum wave that uses very low levels of energy, about the same amount as radio waves. In fact, non-ionizing microwaves are similar to those used in television broadcasting, radio waves, or cell phones.

They're even less powerful than the waves used in radar guns or devices that detect smoke in a home or office building.

Effects of Microwave Cooking on Foods

There are no bad effects of cooking foods with a microwave except for the explosion of liquids which happens when you overheat liquids in a microwave.

You cannot get Radiation Sickness with Microwave Cooking

Microwaves aren't the same as X-rays, and you can't get radiation sickness from standing in front of a microwave when it's running. Microwaves are a type of non-ionizing radiation, which means they don't have enough energy to knock electrons out of atoms.

X-rays and gamma rays, on the other hand, are ionizing radiation strong enough to strip electrons from atoms. This is what gives them their cancer-causing ability, but it also makes them easy to detect. People who work around ionizing radiation wear dosimeters that change color when exposed to it so they can know if they've been overexposed.

Microwaves have no such effect on people. Even if you hung around a microwave all day long, the most likely thing that would happen is you'd get hungry.

According to J. Marshall Shepherd, a geoscience professor at the University of Georgia, if water and other liquids are left for too long in a microwave, they overheat or go beyond the boiling point without appearing to do so. The liquid reaches temperatures of up to 260 °C (500 °F).

At that point, a little disturbance (like a spoon or chopstick) or even shaking the container can cause an eruption since all of the built-up energy is suddenly released.

It’s not only water that can reach this state; any liquid such as coffee or tea can be superheated in a microwave (though many liquids have impurities that prevent them from reaching temperatures higher than their boiling points).

Avoid Overheating food in a Microwave

In terms of nutrition, cooking food in a microwave is not much different than other forms of heating. Microwaving is not inherently bad for your health; the real danger comes from overheating or overcooking foods.

As with all other methods of cooking, microwave ovens affect the nutritional value of foods as well. The most important effect is on vitamins B and C, which are heat sensitive and are destroyed by heat even during conventional cooking methods. Microwaving food causes additional vitamin loss because it heats food faster than other methods of cooking food.

Avoid overheating food in a microwave, especially vegetables, which have a lot of vitamins that are destroyed by excess heat, the University of Michigan advises.

Microwave ovens are incredibly convenient and safe, but they can be dangerous when used incorrectly.

The damage that can be caused by a microwave is not always immediate; some injuries occur over time.

But as with any appliance, there are some things you need to know to stay safe when using your microwave.

Here's how to use your microwave safely: 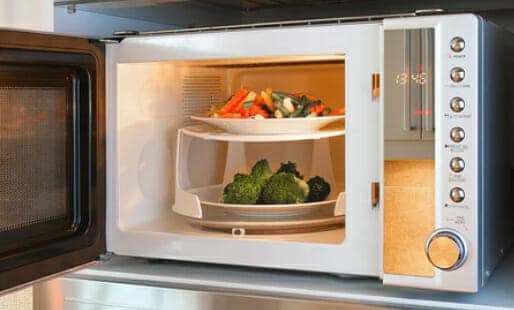 Use Only Microwave Safe Container

Use only microwave-safe containers when heating food in a microwave oven. Don’t use metal utensils in an active microwave oven. Metal objects like forks or bowls can cause sparks inside an operating microwave, which could damage the appliance or even start a fire. Do not heat food using plastic as they can burn unless marked microwave safe.

Paper plates, wax paper, paper towels, plastic wrap, and other high-moisture items are designed for one-time use only. Do not reuse them in the microwave because they could cause fires or injuries from steam burns.

Keep an eye on your food, and don't let it overcook or burn in the microwave. Burnt food can emit smoke that can cause smoke detectors to go off, but more importantly, it may start a fire if left unsupervised.

And it's not just food that poses a fire risk; plastic storage bags and foam trays used to hold meat (like you find in grocery stores) are not designed for microwave use either and could also catch fire if overheated. 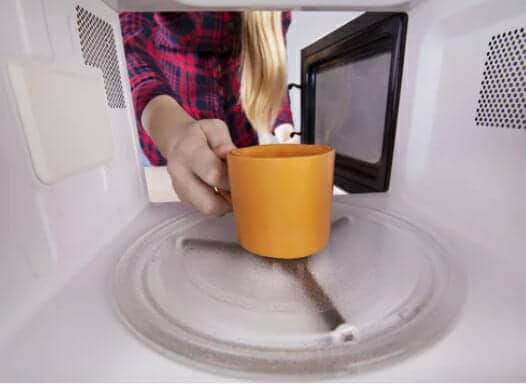 Do not overheat your tea or water. Superheated water exists when water is heated beyond its boiling point. When superheated liquids are disturbed (e.g., stirring with a spoon or dropping objects into it), they can "explode" out of the container suddenly and violently. It's best not to heat water or liquids for more than 2 minutes at a time.

Use Gloves When Lifting Hot Containers in A Microwave

Always wear gloves when microwave cooking. It is easy for the container to slip and spill hot liquid onto your hand, possibly causing burns.

Even if the microwave itself didn’t burn you, the containers that hold food heated in a microwave could get extremely hot, hot enough to burn your skin if you aren’t careful when picking them up. Always use gloves or potholders when removing containers from a microwave oven.

Use caution when removing lids or seals from containers heated in a microwave; some foods may have become superheated. 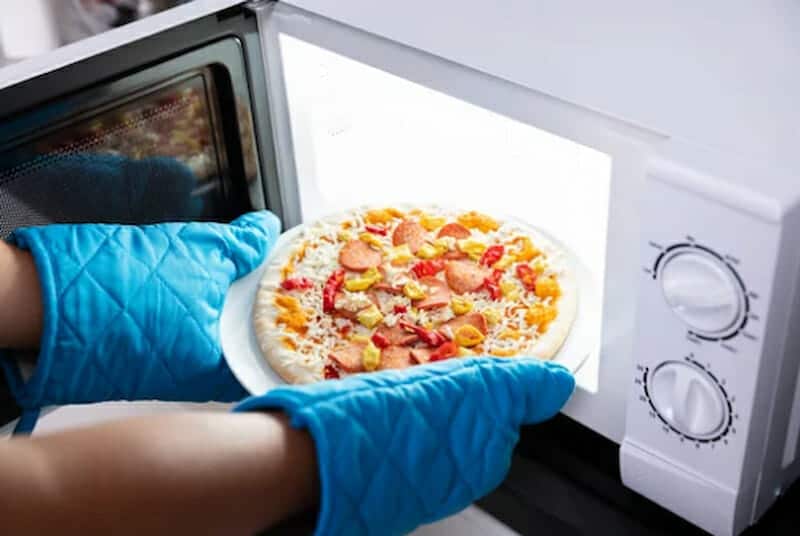 Follow the manufacturer’s instructions for use. Carefully read the instructions that came with your microwave and heed all warnings about proper use and cooking with the microwave. If you no longer have the manual, check online for a copy. Don’t use an appliance that you don’t understand properly.

Check for Damage of Your Microwave and Repair It Asap

Make sure there is no damage to your oven that could cause it to malfunction and possibly start a fire. Check all doors, hinges, and latches for proper function, and make sure the door seals completely when closed. Check for cracks or damage around seals or venting areas as well.

Frequently clean the inside of your oven so that food does not build up and potentially cause a fire. If you see anything wrong with your oven at any time, do not use it until it has been repaired by a qualified technician. 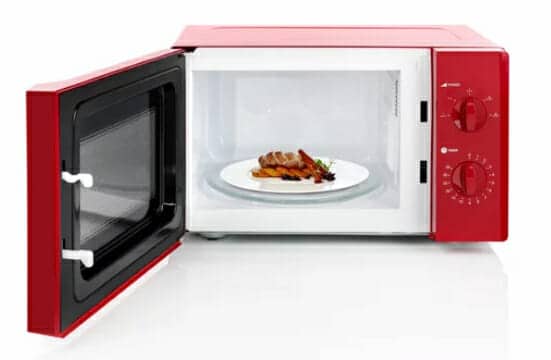 This may indicate a big problem. If a microwave is not operating properly, it should be repaired or replaced by a professional before being used again.

Don't lean or stand directly against a microwave oven for long periods while it is operating.

Don't let children operate a microwave oven unsupervised. They may not understand the potential danger.

Now that you've read about tips to keep your microwave operational and safe you can find out more about different models, as we conveniently reviewed different types of modern microwaves to suit all your needs. Check out the extracts from those reviews we shared here:

Convection ovens have great cooking power, a child safety lock to prevent accidental usage of the microwave, and different cooking levels. Like we mentioned before, choosing a convection microwave for your needs will be influenced by these 3 main factors - capacity, features for your budget, and your counter space.

Best Microwaves For Home Use

The more features you choose to have, the more expensive the microwave oven for home use would be. The good news is that you can choose to keep things very economical by simply going for a microwave oven with minimal features that meets the size and power requirements as stated earlier.

To reiterate this, a basic microwave oven, in our opinion is a small to midsize, non-inverter solo countertop microwave oven. Why? because a microwave such as this is easy to operate, is affordable, does not occupy much counterspace and is easy to install.

Most of the ovens in this category are quite expensive. This is generally due to two reasons: high powered microwave ovens are heavy duty and thus feature expensive components, secondly, they are very large. Some of the premium ovens in this power category though offer cutting edge technology, albeit at a higher cost.

A midsize model is excellent for a regular family. The smaller models are generally reserved for offices, dorm rooms or garage like spaces. Larger microwave ovens are reserved for commercial spaces, so if you are have regular sized family or 4-5 members, then a midsize microwave oven would work perfectly for you.