How Many Amps Does a Microwave Oven Draw? | Electrical and Safety Concerns Addressed

How much current (Amps) and appliance draws is a very important consideration particular when it comes to the electrical design and safety. So how many amps does a microwave oven draw?

That is a fairly vast range and therefore, in order to pinpoint the current amp rating for your microwave, it is important to read and understand the voltage, current, and power specifications of your microwave.

Here we will particularly talk about microwave amp rating as well as talk about why that matters.

How Many Amps Does a Microwave Oven Draw? 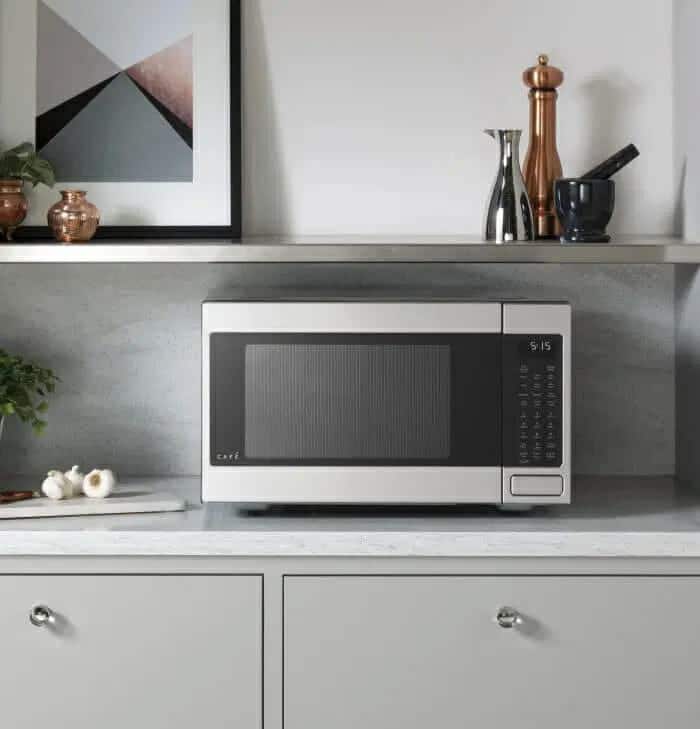 As mentioned earlier, a microwave oven draws anywhere between 9 Amps to 15 Amps depending on 120 volts.

Below we have compiled a quick guide regarding the input power value of microwave and its corresponding amperage for both 120 and 220 volts.

Here we have taken the Input Power of the microwave (not the output power).

How to Calculate the Amps Draw?

The figures mentioned above are just for your information, you can calculate the current (amps) drawn by a microwave yourself using a simple formula:

In order to use this formula, you will need to know the input current and the standard wall voltage in your country. Again for the US, the standard voltage is 120 V and for Europe and Asia, it is 220 V.

The beauty of this equation is that it can be used for all electrical devices. All you need to know, in essence, is the input current of the appliance. Voltage is more or less known anyways.

However, it is of utmost importance that you use the INPUT CURRENT value and NOT the OUTPUT POWER value when calculating the current drawn.

You will notice that microwave ovens, like all devices, have two power ratings i.e input current and output power.

You will also notice that the output power of a microwave oven is much lower than the input current.

This is because no electrical device is 100% efficient. Microwave ovens are about 65% efficient. Meaning 65% of the power drawn (Input current) is converted into microwave energy (Output Power).

For instance, a 700W microwave oven, which is considered the weakest microwave class for home use, draws in about 1100 Watts of power if it has a typical efficiency of 65%.

It must be noted that efficiency is different from model to model. Some are better at converting input current more efficiently to output microwave energy, others are less.

The most powerful class of microwave ovens for home use typically have an output power of 1250 W. These would draw in the power of about 1850W.

The point to note here is that when calculating the amps, you have to use the much higher Input current value. The higher the power, the higher would be the amp drawn.

The amps drawn by any appliance are important considerations when it comes to sizing the electrical components or when building the circuit design for your kitchen.

You have to know the number of amps (load) connected to your circuit in your kitchen before you decide on designing it.

A typical kitchen design may have 2 dedicated 20 amps circuits. However, if you have a lot of high-powered appliances, say a very powerful microwave oven, then you may need more dedicated circuits.

A low-powered microwave oven drawing a relatively low amount of current can be connected to an electrical wall socket easily without having to worry about the breaker tripping.

However, if you have a high-powered microwave drawing in a lot of amps, you may have to install a dedicated circuit just for that.

A dedicated circuit is one that has a separate circuit breaker installed. The breakers also have an Amp rating of their own such as 15 Amps, 20 Amps, etc. What this means is that IF the connected total amperage of the appliances exceeds the breaker amperage rating, then it will trip.

This is for your own safety against short circuits and power surges.

Hence if you have a high-powered countertop microwave oven with a rated input current of 1850W drawing about 15 Amps of current at 120 Volts (as mentioned earlier) you will need to have a dedicated branch circuit with a 20 Amps breaker installed at least.

Similarly, if you have a low-powered countertop microwave oven rated at 1100W input current drawing in 9.16 Amps of current at 120 Volts, then you will need a circuit breaker that has approximately a 12 Amps rating.

It should also be mentioned that for affixed or installed microwave ovens like over-the-range microwaves or built-in microwaves, their current drawn should not exceed 50% of the breaker rating.

Another important consideration of the current drawn by a microwave is that it relates to the size of the components within the microwave itself.

From diodes and capacitors to fuses, all are dependent upon the amount of current drawn.

For instance, the fuse is a component that just like a breaker, breaks the electrical current if there is a short circuit or a power surge.

The fuse is generally sized at about 135% of the rated input current of a device. So if your microwave oven is drawing in about 10 Amps of current, the fuse will need to be rated at about 13.5 Amps for your safety.

Finally, how many amps a microwave oven draws has an important role if you want to use it over an extension cord.

While using a high-powered electrical device is not recommended over an extension cord, if you absolutely have to, you then have to take into consideration the input current of your device and then decide on the corresponding gauge (diameter) of the extension cable.

The higher the current drawn, the thicker the cable would need to be.

In the United States, the American Wire Gauge Standard is used.

The lower the AWG number, the bigger the diameter of the cable and hence the more current it can carry.

If you have a microwave oven you want to use over an extension cable that draws 15 amps of current, then you will need at least a 14 Gauge AWG cable.

Of course, the thicker the cable, the more expensive it is.

Here we talked extensively about how many amps does microwave oven draw. We specifically talked about input current and why that matters.

Basically, input current, or the current drawn, is an important consideration for all things related to electrical circuits and electrical components.

It goes without saying, that knowing the input current of your microwave, size of your breakers, size of the cables, etc and whether they are all compatible with each other is highly important.

Approximately 12.5 amps.
Thus, if you have a 1,500-watt microwave oven operating at 120 volts, you will need 16-gauge wire to accommodate the 12.5% amperage requirement.

Yes, a microwave needs a 20 amp circuit. The National Electrical Code (NEC) requires that most microwaves have their own dedicated circuit to ensure that they have enough power to operate properly.

5. Does a 1000 watt microwave need a dedicated circuit?

Our Recommended Microwave Oven
Previous
Next