Is it Safe to Stand in Front of a Microwave? | Facts You Need to Know

In recent years, microwave ovens have become one of the most used kitchen appliances in the world. They are convenient, quick, can cook, and can reheat almost any food. But, is it safe to stand in front of a microwave?

But we all know that microwave ovens use radiation for cooking food. So the question is, is it safe to stand in front of a microwave while it’s working? Yes, it is. Microwave radiation is safe.

To answer this question well, we need to understand how a microwave works and which type of radiation it emits.

How Do Microwave Ovens Work?

The energy in a microwave oven is produced by an electron tube called a magnetron. The magnetron takes electricity from the power outlet and converts it into microwaves.

It's perfectly safe to stand in front of a microwave oven while it's running. Microwave ovens are designed so that the waves are contained within the oven itself. The energy of microwave radiation is absorbed by food and causes its temperature to rise, which is how the food gets cooked.

Leaving an empty microwave oven running for long periods can be a fire hazard, but standing in front of one shouldn't be a problem. 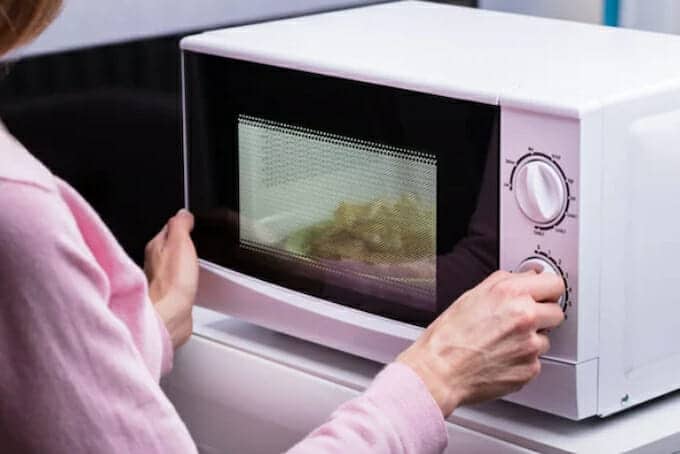 According to this study guide, radiation is energy given off by matter in the form of waves or particles and includes heat, light, radio waves, microwaves, and x-rays. Most types of radiation are harmless and can be beneficial at low levels. Some types, such as gamma rays, can be harmful when absorbed in large amounts.

Ionizing radiation has enough energy to knock electrons out of atoms, thus turning one material into another and ionizing it. This process can harm living tissue because it alters chemical bonds. Examples of ionizing radiation include gamma rays, x-rays, alpha and beta particles, cosmic rays, and particle accelerators (such as used in medical treatments).

Ionizing radiation has many practical uses in medicine, research, and construction but presents a health hazard if used improperly. Exposure to radiation causes damage to living tissue. Ionizing radiation is regulated by international and national agencies because of its harmful effects. 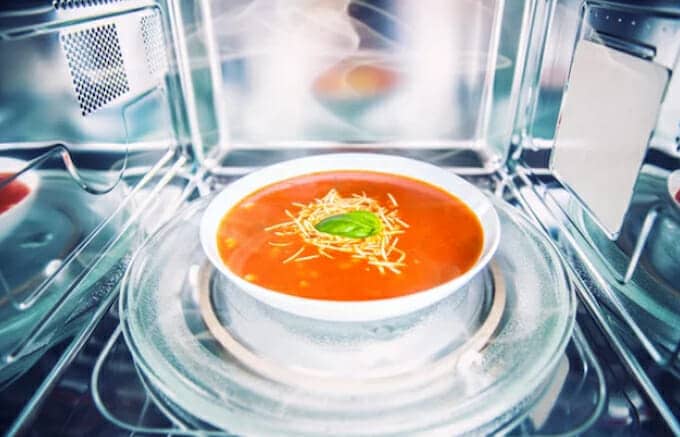 Can You Get Cancer from Standing in Front of the Microwave?

No, you cannot get cancer from standing in front of the microwave. Since microwaves produce non-ionizing radiation, they do not have enough energy to damage your DNA.

Microwave ovens use a type of electromagnetic radiation called microwave radiation. This is a form of non-ionizing radiation, which means it does not carry enough energy to damage DNA inside cells

If you have ever stood in front of your microwave as it heats up your dinner, you’ve probably wondered if that’s safe. The short answer is yes.

Microwave ovens are designed with safety features so that they do not allow microwave energy to escape during regular use. These safety features include microwave doors and glass windows that prevent the waves from affecting anything outside the oven. 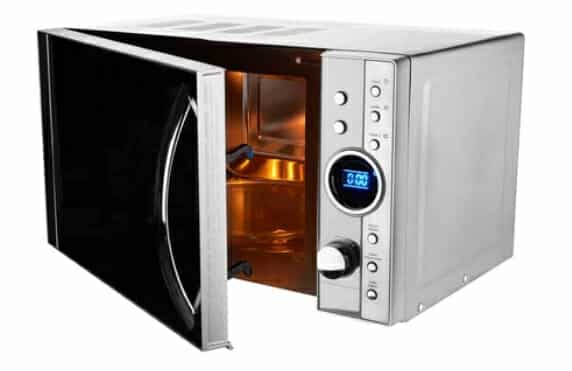 Protective Mesh; Microwave ovens are designed so that radiation does not leak beyond their protective exterior. There is a protective mesh screen on the glass door with tiny holes that reflects back radiation of microwaves.

The screen blocks most, but not all, of these rays from escaping through the glass door. However, even at close range, it is difficult to feel any heat or see any light from microwaves emitted through these holes.

Timers: Modern microwave ovens have timers built-in that will turn off the unit when they expire. If you forget to turn off your microwave, it will only run until the timer expires.

Fuse; The fuse interrupts power to the magnetron if there is a power surge or other electrical problem with your microwave. If your microwave stops working, it is possible that you have a burnt-out fuse, and you'll need to replace it before continuing use.

The U.S. Food and Drug Administration (FDA) says that microwaves are generally safe as long as they meet certain requirements:

1) The microwave oven must be labeled with the manufacturer's name, address, model number, and serial number, along with a listing of its wattage rating.

4) Most microwave ovens have a "radiation leakage check," which measures the amount of radiation leaking from the door and other parts of the microwave. This test is required only for domestic (not commercial) appliances.

·         Never operate an empty microwave oven. Without food or a container of water to absorb the microwaves, they could damage the oven and/or cause a fire.

·         Avoid standing directly in front of an operating microwave oven for long periods of time. This could lead to short-term health effects such as cataracts and other eye problems, as well as headaches, dizziness, and memory impairment.

·         Use recommended cookware; Use only microwave-safe dishes and utensils in your microwave oven. Don't use plates with metal trim or metal containers because microwaves will reflect off of them and may damage the appliance or could possibly cause a fire.

·         Do not use plastic containers unless they are marked microwave safe.

·         Don't let kids operate the microwave alone. Teach them the proper way to use it, especially when cooking or reheating hot foods and liquids.

·         Use oven mitts to lift hot food and liquids from the microwave, especially when removing items such as a cup of coffee or tea, which may be very hot even if the container feels cool to the touch.

·         Follow package directions carefully. Make sure to remove metal twist ties and cardboard packaging before heating containers in the microwave.

·         Never heat items in sealed containers because pressure buildup can cause them to explode and result in personal injury and damage to the appliance. 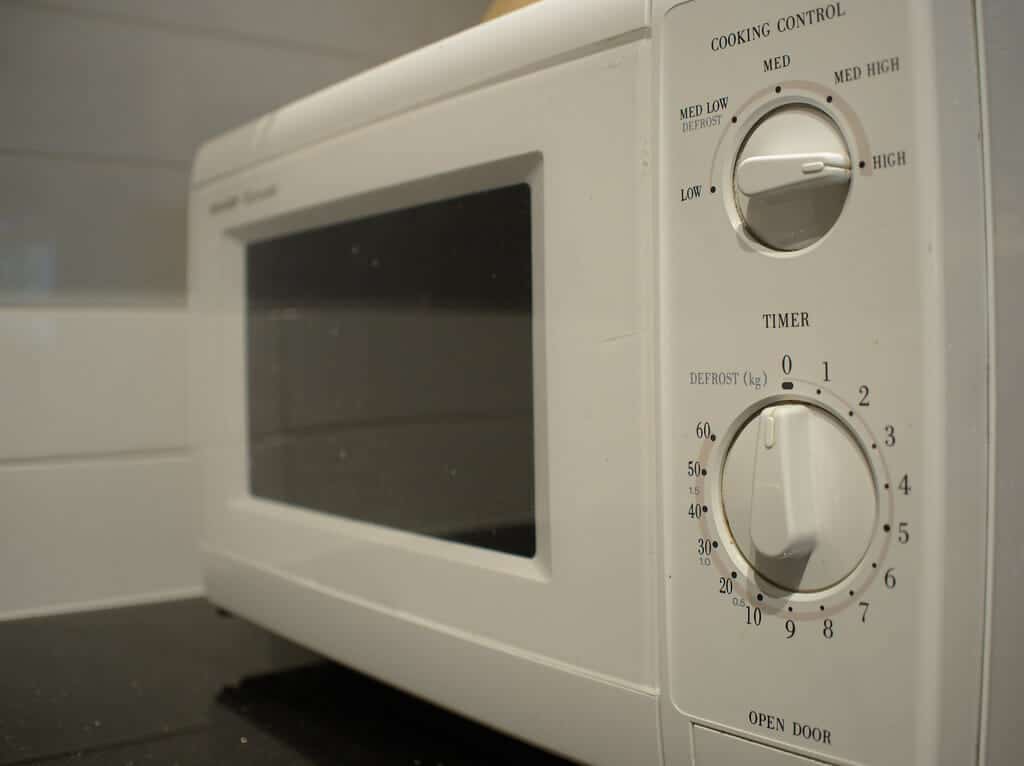 What Is the Danger of Standing in Front of a Microwave?

There is no danger of standing in front of a microwave. Despite microwaves’ popularity, there are still plenty of misconceptions about how they work. One common misconception is that microwaves leak radiation and are harmful to people.

Microwaves are always tightly sealed inside to prevent energy from escaping, so they should not be able to harm people unless the seals on the door are damaged, or the microwave is old.

Microwaves Also Do Not Emit Radiation When They Are Turned Off

The radiation emitted by microwaves is non-ionizing, which means that it is incapable of breaking chemical bonds. The energy level of this radiation is too low to affect the cellular structure. Also, there is no radiation escaping from microwaves that have been turned off.

Now that we've cleared out any uncertainties about microwave ovens safety, you can find out more about different types of modern microwaves to suit all your needs. Check out the extracts from those reviews:

Convection ovens have great cooking power, a child safety lock to prevent accidental usage of the microwave, and different cooking levels. Like we mentioned before, choosing a convection microwave for your needs will be influenced by these 3 main factors - capacity, features for your budget, and your counter space.

Best Microwaves For Home Use

The more features you choose to have, the more expensive the microwave oven for home use would be. The good news is that you can choose to keep things very economical by simply going for a microwave oven with minimal features that meets the size and power requirements as stated earlier.

To reiterate this, a basic microwave oven, in our opinion is a small to midsize, non-inverter solo countertop microwave oven. Why? because a microwave such as this is easy to operate, is affordable, does not occupy much counterspace and is easy to install.

Most of the ovens in this category are quite expensive. This is generally due to two reasons: high powered microwave ovens are heavy duty and thus feature expensive components, secondly, they are very large. Some of the premium ovens in this power category though offer cutting edge technology, albeit at a higher cost.

A midsize model is excellent for a regular family. The smaller models are generally reserved for offices, dorm rooms or garage like spaces. Larger microwave ovens are reserved for commercial spaces, so if you are have regular sized family or 4-5 members, then a midsize microwave oven would work perfectly for you.