Knowing the energy consumption of an appliance gives you a great insight into how much it would cost to operate. Here will specifically look at what is the power consumption of a microwave oven.

Generally speaking, a microwave oven is pretty cheap to operate. Since it is only used for minutes at a time, it does not consume constant energy unlike lighting and air conditioning.

With that, let us delve a bit deeper into this topic. If you are unaware, the first thing you need to do is familiarize yourself with the different between power rating and power consumption of an appliance.

Power rating and power consumption are two different yet related aspects of any electrical device.

Power rating defines the peak power that the appliance would draw from the wall socket in order to operate. Basically, if this rated power is not supplied, then the microwave oven may malfunction. Power rating is specified using the unit Watts (W) or Kilowatts (kW)

Let Us Simplify This With an Example:

If a microwave oven has a rated power of 1400 Watts (1.4 kW), then its consumption would be about 1.4 kWh IF it were continuously on for an hour.

If the same microwave oven was only on for half an our, its consumption would be half as that or 0.7 kWh.

What is the Power Consumption of a Microwave Oven?

It is important to note here that you have to take the INPUT POWER into consideration when calculating the consumption and NOT the OUTPUT POWER.

You may be familiar with the common output powers for microwave ovens that range from 700W to 1250W for typical home use. However, these do not reflect the power drawn from the wall instead they define the power that is converted to microwave radiation.

A typical microwave oven has an efficiency of 65%. Meaning 65% of the INPUT POWER is converted to the OUTPUT microwave radiation.

The following are the typical OUTPUT wattage ratings for home microwaves.

How to Reduce Consumption?

There are plenty of ways you can reduce consumption on a microwave oven, let us review a few.

You can select the right power level to reduce the consumption

The first and for most important is the Power Level selection.

Power Level selection is offered in almost all microwave ovens. It allows you to set the percentage of the total output power that the microwave should operate at.

Most microwave ovens have a total of 10 power level settings ranging from 1-10 with each setting representing a 10% increment or decrement.

Take defrosting, for instance. This task can be done fairly well even at 400 W output power. So if you have 1000 W microwave oven, you can set it to Power Level 4. Here it would not only defrost your food, but also consume mere 40% of the max power consumption.

Similarly, when keeping food warm, you can set the microwave to just 10% consumption or Power Level 1.

Each food has a typical time cycle settings. Operating beyond that would results in only dehydrating your food of water but also result in needless energy consumption.

When reheating food, a microwave oven generally tends to reach a max of 212 degrees Fahrenheit or 100 degrees Celsius which is the boiling point of water.

When food reaches this temperature, the goal of the microwave is achieved. To save energy, you should therefore, not operate any longer.

Take water for instance. In a 1200 Watt microwave oven, it takes about 45 seconds for a glass of water to reach the boiling point. Operating the microwave oven beyond this would be futile since that would only convert the water into steam.

The same glass of water would take about 2 minutes in a 700 Watt microwave oven.

Hence, it is important that you know the power of your microwave as well as the PRECISE cooking time for various type of foods in your microwave.

Stir the Food / Use Small Portion

If you have a habit of loading up your microwave with food for reheating or defrosting, the you are doing it completely wrong.

Densely packed food or large portions of food are hard for microwaves to heat up. This is especially true if you have low powered model

Hence, instead of increasing the time cycle for reheating the large meal, it is rather advisable to stir it from time to time.

Better yet, you can use smaller portion. The more spread out the food, the better and quicker the microwave oven will reheat. 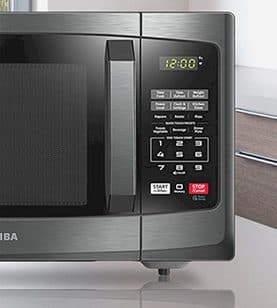 This tip is for the most energy savvy consumers.

If you want to reduce even that, you can unplug the microwave oven after use.

This would not result in drastic energy bill savings, but it can give you a little piece of mind.

Let us take an 1100 watt microwave oven that has an Input Wattage of 1700 Watts. Let us also note that the average electricity rate in United States is 13.19 cents per kWh.

Also recall from earlier that all microwave ovens have Power Level settings whereby you can select the percentage of the total output power for your cooking.

If you selected 50% power level, the consumption would be reduced by half in theory. In turn, this would cost you half as much for the same time span.

It is important to note that you take the input power and not the output power of a microwave when calculating the energy consumption.

In this article we talked extensively about microwave energy consumption, how much it costs to operate, and how you can reduce it.