When did Microwave Ovens Become Popular? | Our Full Guide to This Appliance’s History

As the popularity of the microwave oven grows to conform to the daily lifestyle of millions of people around the world, one cannot help but ask, when did microwave ovens become popular?

In short, according to history, the first microwave ovens “Radarange” were invented in 1945 (see 'When Was the Microwave Invented?' post); but they were not made available for household consumption until 1967. Their popularity begin to rise in 1970s until their peak US sales in 2004.

However, in 1997, data record shows that 9 out of 10 American households owned a microwave oven (US Bureau of Labor Statistics) with a substantial increase in sales around the world – over the next decade.

Microwave ovens have made life easier and cooking less stressful than it was before its invention. Nowadays, people can effortlessly cook their popcorn in under five minutes in the oven.

Apart from reheating frozen foods and the simpler popcorn, the use of the oven has progressed into any and all sorts of microwave cooking from boiling to the far more complex forms of baking.

Let us explore how they rose in popularity.

When did Microwave Ovens Become Popular? 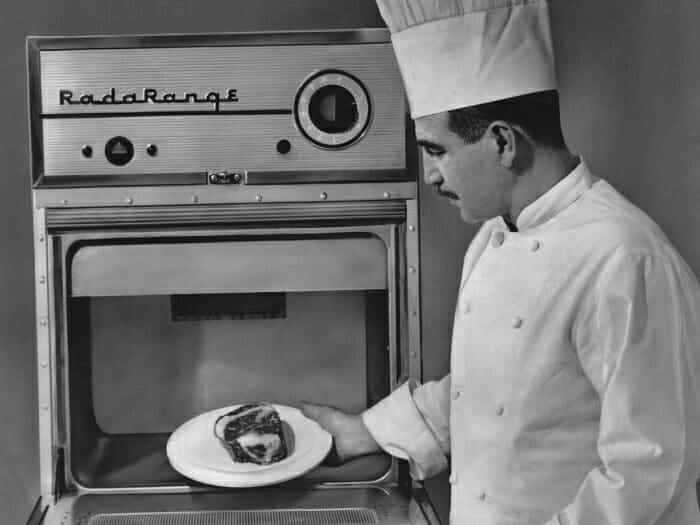 After the invention of microwave ovens for cooking in 1946, they were not exactly popular immediately. Initially, they were made to be used in restaurant settings.

They were large and clunky and had to be water-cooled. The pioneers in making commercial microwave ovens were Raytheon which unveiled their Radarange microwave ovens in 1946.

It took about two decades before it became available for household purchase in 1967. Although, during this time, most households were just newly introduced to this strange appliance that “beeps”.

The popularity of microwave ovens began to rise in the late 70s as more than 20% of American households had one. However, this might not be the case for other countries of the world.

Microwave ovens became popular around the 1980s in the UK and also in Japan around 1975.

There were a few hiccups in between such as the feud between the Consumers Union and the FDA whereby the former accused microwave ovens to be “not completely safe”, whereas, the latter defended its position and its testing methods.

Despite all the warnings and scares, the sales of microwave ovens continued to soar until about 2004.

What Made Microwave Oven Popular in the 70s?

Conventional ovens have been in homes for as long as their invention. But then came microwave ovens; the invention of these gadgets changed the definition of cooking to the extent that even recipes were designed to be cooked in them.

To understand what made microwave ovens become so popular in the 70s, it’s imperative to compare the appliance with the pre-existing cooking appliance which is the conventional oven. Here are some of the criteria:

An oven works by generating electromagnetic waves which heat up food, unlike conventional ovens which make use of a heating element to heat up the entire oven where the food is cooked.

Compared to conventional ovens, an oven is easier to use. All you need to do is to plug in the power socket, place your food inside and set your timer.

No preheating, no use of foil, no waiting for a long time, and it is easier to clean as well as it has no heating elements or racks.

As long as the food is usually placed in its appropriate containers before they are placed to be cooked in the oven.

Microwave ovens are more portable than conventional ovens hence the name countertop model of oven. Its reasonable size allows for more room in the kitchen.

In fact, as a result of this portability, home designers devised a way to position the oven in a special cupboard to improve space in modern kitchens.

Energy usage is one of the limiting factors concerning the use of conventional ovens. Therefore, it doesn’t come as a surprise that people embraced the less energy-consuming microwave oven in the 70s.

The most fascinating and appealing feature of the microwave oven is its ability to cook food twice as fast as any conventional oven. And unlike a conventional toaster oven, it doesn’t need to preheat. It saves time and in the long run saves microwave energy. What’s not to love?

It’s not surprising that microwave ovens cost less than regular ovens. The price is affordable and it works like an oven. To top it all, it doesn’t incur installation costs. It’s a win-win for anyone who loves to cook.

A Brief History of the Microwave Oven

The idea behind the invention of ovens was hatched by a brilliant engineer named Percy Spencer after the Second World War. During this time, he worked for the Raytheon Company located in Massachusetts, United States.

This idea came to him after he realized that the chocolate bar in his pocket melted to goo when he stood by radar equipment. That made him curious enough to investigate popcorn; leading to the invention of the microwave oven.

But the invention of this appliance would not be made possible without the work of John Randal and Harry Boot who invented the magnetron tube which is the key element that emits microwaves.

Since the invention of the microwave oven in 1945, there have been several additions and innovations made possible by the advancement of technology.

The first microwave oven models “Radarange” were enormous boxes compared to the ones we know today. Standing at a height of 6 feet and weighing over 300kg, these gadgets were sold for US$5000 each.

It’s not much of a surprise that they were used mostly on trains, ships, and in big-shot hotels. Although in 1967, Domestic Countertop Ovens were made available for household use – they were sold for US$495 each.

Today, ovens exist in most households. They come in different sizes, colors, capacities, and power outputs. With the help of technological innovations, there is a wide range of features to be found in a microwave oven.

Now, with convection ovens, there is a myriad of possibilities for cooking.  From defrosting to toasting to baking to broiling. Seems like the journey of 75 years actually did pay off.

In this article, we went through the history of the invention of ovens to answer the question “When did microwave ovens become popular?” We also focused on the generations of ovens and the innovations made since their invention.

The microwave oven has won over millions of users not only back in the last century but also in this century as well. Although, today, there are more competitions out there.

So, enjoy all your microwave oven has to offer. Don’t just reheat or “try to melt your own chocolate bar”. Percy Spencer made sure it can do so much more.

2. When did the microwave go on sale?

The microwave oven first became available to the public in 1947. It was created by Percy Spencer, who was working on radar technology for the military at the time.

4. Are new microwaves better than old?

Yes, microwaves have definitely improved over the years. The new ones are more powerful and have more features. They're also more energy-efficient, so they save you money on your electricity bill.

5. What was the first microwave oven called?

Microwaves are kitchen appliances used for heating food. The first microwave oven was called the Radarange. It was invented by Percy Spencer in 1945.