Have you ever wondered why toasted bread, baguettes, bagels, and muffins have such an irresistible taste?

It all boils down to a scientific process called Maillard reaction. New flavor compounds and odors are released, making the bread products have a caramel-like taste.

The modern toaster has perfected the science of Maillard reaction, and that is why it should be part of your arsenal of kitchen appliances.

Whether you are a seasoned chef or a culinary newbie eager to impress your guests and family, you will need to get your hands on either a toaster or a toaster oven.

The key question is, how do you choose between the two? The is that toasters and ovens have very similar functionalities, but some subtle differences exist, and each device comes with its own set of pros and cons.

Here we will review Conventional Toaster vs Toaster Ovens and read the salient features that differentiate the two most common appliances in a kitchen.

We scoured the market and conducted detailed research on toasters and ovens to help you make an informed decision.

How Do they Work?

Let us see how the two differ in terms of their operating principle. 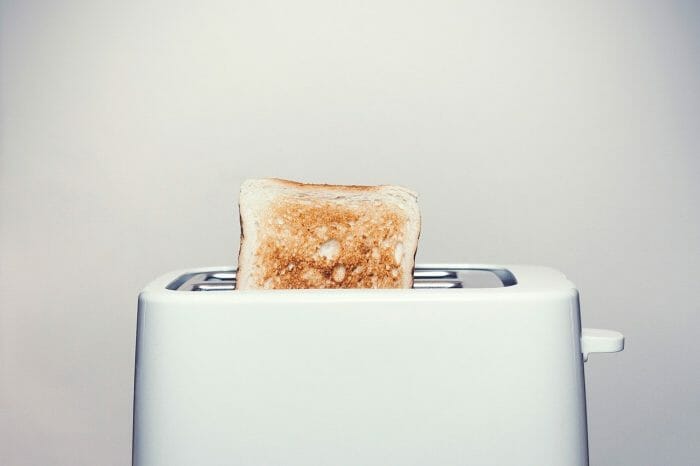 Conventional Pop-Up Slice Toaster is an affordable and a very common kitchen appliance.

A toaster is an electrical appliance that works by exposing sliced bread to radiant heat, resulting in an inviting brownish color.

The most popular household toaster is the Pop-up Toaster, commonly referred to as the automatic toaster.

One thing you will love about the pop-up toaster is its ease of use. Its working mechanism requires you to vertically drop a piece of bread into a toaster slot positioned at the top of the toaster.

You then press down a lever positioned on the side to push down the bread, a move that automatically activates heating elements.

Most models are fitted with a lever knob or push button, which you can use to regulate the toasting rate. After the heating elements do their magic, the toaster is engineered to turn itself off, and the toast pops out of the slot.

Though not to perfection, toasters can cook other foods such as crumpets, toaster pastry, potato waffles, and tea cakes.

However, the accumulation of sugars and fats from these foods inside the toaster can reduce its efficiency and performance.

Also Read: What is a Toaster Oven? 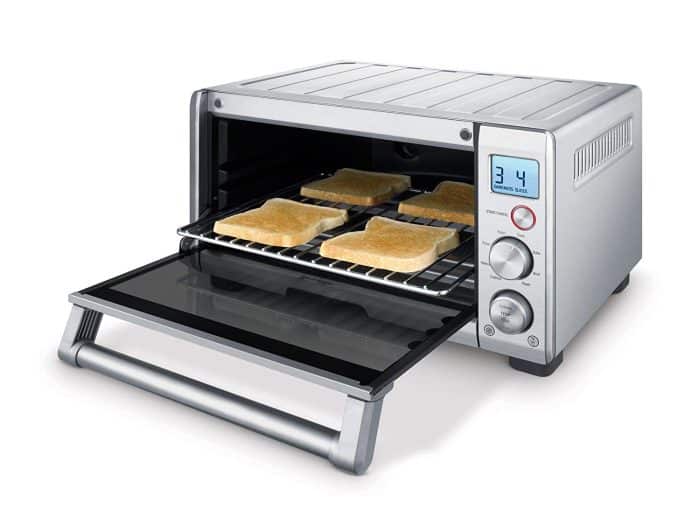 A Toaster Oven is much like a conventional oven but smaller in size. Source: Breville

Toaster ovens are small-scale traditional ovens. They work pretty much like toasters in principle but offer a wider range of cooking functions. That includes toasting, baking, defrosting, broiling, and roasting.

Ovens also have a heating element placed on top, bottom or both for baking and broiling your food. Since they are not just limited to supporting small slices of bread, you can cook your meals and reheat them as well.

Convection Toaster Ovens also feature a fan that promotes even cooking of the food.

Toaster ovens are fitted with an extra-wide front door that features a spring-loaded stop mechanism for automated opening at the end of a cooking cycle.

Heating elements are positioned on the top and the bottom of the toaster to ensure even heat distribution during toasting.

When toasting, you place bread horizontally, making it possible to prepare toast with toppings such as toasted cheese and garlic bread. You can also make a sandwich, a favorite, especially among kids.

Other Points to Consider

Pop-Up Toasters are defined according to the number of slices they can toast at a time.

In this regard, there are generally two types of toasters: two-slice toasters and four-slice toasters. There are also six-slice toasters, but they are expensive and take up valuable countertop space.

Pop-Up Toasters are, without a doubt, cheaper than a Toaster Ovens. Price tends to vary with model, size, and design, but the most important consideration when acquiring one should be the intended use.

Toaster Ovens are also defined and priced according to their size. However, additional features like Convection fan, rotisserie, multiple racks, etc can add further to their cost.

A regular Pop-Up Toaster outshines a Toaster Oven when it comes to shading, thanks to even heat production and distribution. Toasters churn out attractive brownish pieces with a consistent shade on both sides.

Without a doubt, a Toaster Oven consumes more electricity than a regular Toaster if you consider factors such as toasting time.

Pop-Up Toasters have a wattage range of between 800-1500. On the other hand, Toaster Ovens are rated at 200-1700 Watts. The higher power consumption in toaster ovens has much to do with their relatively bigger size and a wider range of uses.

If you have a busy morning routine, then a Pop-up Toaster is the ideal appliance to prepare your breakfast. On average, a cooking cycle lasts 2-3 minutes with Regular Toasters compared to 4-6 minutes for Toaster Ovens.

However, toaster ovens have time and temperature control settings, which give you more control over the cooking process.

It is important to adjust the settings properly, depending on the type of food. You may also need to preheat toaster ovens and keep turning the food manually to ensure even cooking.

A regular toaster is a very compact appliance, and forgetting to maintain it while cleaning other kitchen gadgets is usual.

Accumulation of grease and bread crumbs inside the toaster can significantly reduce their efficiency. For this reason, it is important to do do some thorough cleaning once in a while, and while at it, be sure to remove the crumb tray and wash it externally.

You should use a toothbrush to brush the interior, taking care not to damage the heating elements. A soapy sponge can be used to wipe the exterior.

Cleaning a toaster oven, on the other hand, can be quite an uphill task. You have to remove racks, crumb trays, and the baking pan and wash them carefully under the sink.

It is important to scrub the inside of the oven with baking soda and soapy water to avoid foul smell and build-up of unwanted elements.

Also, you should avoid contact between the heating elements and water to prevent damage. After that, be sure to wipe the oven door and the exterior with a soapy sponge.

In short, it is generally much more easier to clean a regular toaster as compared to a toaster oven.

Also Read: What is Oven Self Clean Feature?

It is very important to make sure you plug the appliances from the power source immediately after use as well as during cleaning.

As with all electrical appliances, stacking items into the toaster can trigger electric shock. During cooking, both toasters and toaster ovens get hot on the outside. Therefore, you should make sure any plastic or flammable item is placed at a safe distance away from the cooking area.

For toaster ovens, you will need to use protective gloves to fetch food after cooking.

Kitchen tongs can be a lifesaver as they can be used to turn the food in the oven, avoiding the use of hands.

However, just as anything that is plugged into the wall socket, Toaster do carry a certain risk and you should be careful when operating it.

Both should be placed in a well ventilated area when in use.

Why Not Have Both?

There are few Toaster Ovens that actually combine both the functionality. As such, they offer long slots for easily toaster slices of bread on top.

Fortunately, these models aren’t too expensive. Therefore, if you wish to have both functionalities for convenience in your kitchen, you can look into these.

Nothing beats a good toast for breakfast, and having either a toaster or a toaster oven can go a long way toward improving your morning dietary routine. Although the two gadgets have quite similar functionalities, the cooking items you have in mind ultimately inform your better choice.

1. Is it better to have a toaster or toaster oven?

A toaster browns more evenly than the toaster oven. But the toaster oven can roast a hamburger or roast a four-pound chicken. However, the ovens take longer to grill, 2.5 to 9 minutes, compared with 1 to 4 minutes for a medium toaster. A toaster is a perfect choice for a person on a tight budget.

2. What is a toaster oven for?

A toaster oven offers versatility for everyday cooking. A toaster oven is ideal and efficient for reheating food, breakfast, bake pizzas, broil meat and other recipes. Ovens can save and use less energy but heat fast, particularly compared to a traditional oven.

3. Why is it called a toaster oven?

They now offer a horizontally settled tray and a glass door instead of vertical openings. Best of all, it is also possible for contemporary or high-end models to incorporate specific characteristics to a standard oven, including the Toaster Oven.

4. What happens if you put a metal knife in a toaster?

If you put a knife in the oven toaster, you or another section of the toaster will use any energy from these wires. At worse, you may experience an electrical shock, but you may damage the cables and other electro elements of the toaster although you are not shocked.

5. Does a toaster use radiation?

Toaster heats slices of toast with infrared radiation.  The spindles produce ultraviolet radiation as you place your bread and see the spindles linger in the red. The radiation dries and softens the bread surface.