Simply put, a toaster oven consumes anywhere between 1100-1875 Watt of power. The amount of power generally correlates to how expensive the toaster oven is as well.

The higher the power rating, the more heavy duty a toaster oven is considered to be. Higher powered toaster ovens heat up fast and also run hotter as compared to lower powered ones.

While many newcomers tend to disregard the power rating, it is a tremendously important consideration not just to gauge the expected energy bills, but also to gauge the quality and performance of the toaster oven.

We explore this topic further below.

How Many Watts Does a Toaster Oven Use? 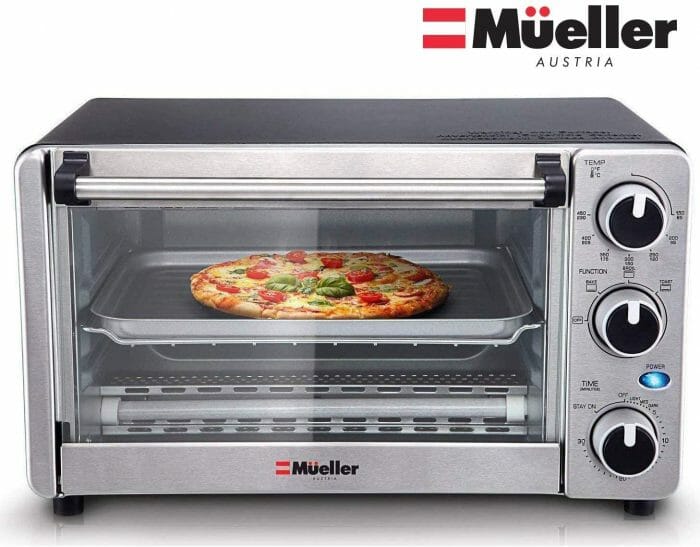 As mentioned earlier, the wattage rating of a toaster oven ranges from as low as 1100 watt all the way to 1875 watts for home use models.

However, the average, and the most common wattage rating for MOST toaster ovens is about 1500 watts. 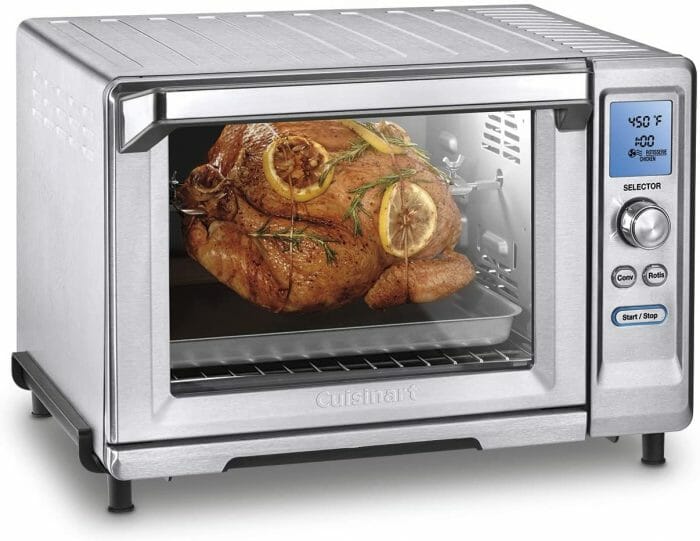 Cuisinart TOB-200N Rotisserie Convection Toaster Oven is an example of a high powered model with 1875 watts.

What Does Wattage Rating Tell You?

Generally, while there is absolutely no standard rule applied that defines the wattage of a particular toaster oven, a few things can help you determine its overall power.

These hot ovens generally have a power rating of around 1800 Watts. Therefore, as soon as you find an oven that can reach temperature beyond 450 degrees, that is a strong indication that it will have a high power rating.

Any toaster oven, regardless of size, that reaches 500 degrees will have a higher than 1500 Watt power rating.

Size can give you a rudimentary idea about the wattage of the toaster oven. While the size highly correlates to the wattage rating, this can be a bit deceiving.

Generally, the smaller the toaster, the faster it heats up and thus requires a lower power rating.

However, there are few small toaster ovens like the Cuisinart TOB-60N1 or the Breville BOV450XL – Mini Smart Oven, that are highly compact, but have a high power rating of 1800 Watts.

Breville BOV450XL has a high power rating despite being a mini toaster oven.

There a few certain features that inherently require a high power.

For example, certain toaster ovens that combine an Air Fryer, have a high power rating. This is because Air Fryer itself requires tremendous power.

When you see multiple features like this, there is a high chance the toaster oven would have a high power rating.

Finally, there is the price. The higher the price, the higher would be its power rating.

For instance, if you take two same size toaster ovens, say with a 1.0 CU FT capacity, with widely different price tags, the one with the higher price tag will generally have a higher power rating.

Compared to a regular oven, a toaster oven consumes 1/3 the amount of power. This is according to the finding of EnergyStar.gov – the leading agency for consumer products.

When you take an average cooking range oven and compared that to the average toaster oven, you will find that the toaster oven is far more energy efficient for small to medium sized meals.

We mentioned earlier that toaster ovens range from 1100-1875 Watt.

Therefore, even the smallest, weakest and most vanilla range ovens are more power hungry than the best of the toaster ovens.

Size of the Meals

Again we would like to reiterate the fact that for small to medium size meals, toaster ovens are perfect and quite energy efficient.

Toaster ovens are just mini regular ovens and hence they can perform all their functions.

Therefore, for a small family, we recommend using toaster ovens to save up on energy bills.

Of course, if you plan to cook large meals, such as bake multiple pizzas or cook and entire turkey, then a large range oven would make more sense.

The power rating for a microwave oven for home use ranges from 700 watt to 1250 watt for sizes ranging from 0.7 CU FT to 2.2 CU FT capacity.

The average power rating for a microwave oven is about 1000 watts.

The higher the power rating of a microwave, the quicker and more consistently it will cook.

Therefore, as far as the energy efficiency goes, microwave ovens are the winners. They use at least 25% less energy when operating.

On top of that, it takes less time to reheat or cook food in a microwave oven.

For example cooking a potato in a microwave oven would take 4 times as less time as compared to that in a toaster oven.

Hence, as far as energy consumption goes, microwave ovens have the crown.

While microwave ovens are energy efficient, they are not as versatile cookers. You cannot bake, broil or toast in these.

Furthermore, functions such as Air Fryer, rotisserie, dehydrator etc are something that a microwave oven cannot equip.

Hence for a vaster culinary horizons, you will have to settle for the high power demanding toaster ovens. 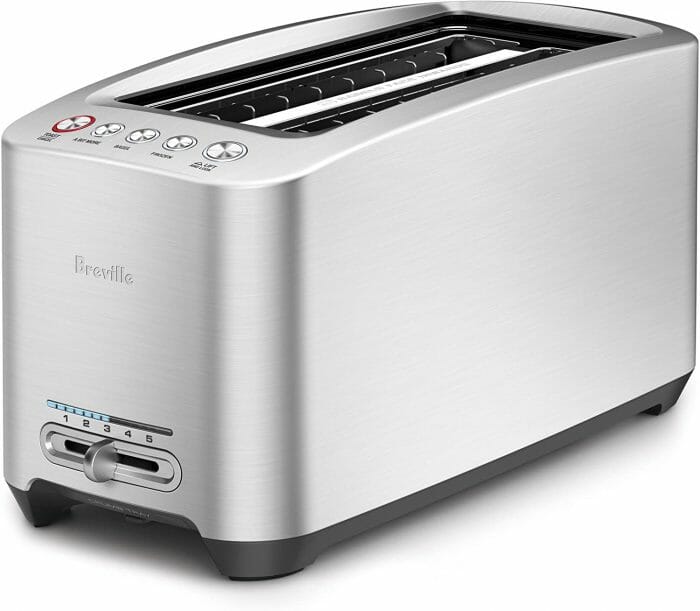 A premium toaster such as this 4 Slice Breville BTA830XL consumes 1600 Watts of power.

A 4 slice, or higher, toaster oven uses at least double the average power of a 2 slice toaster.

Now compare this to a typical small 1200 watt toaster oven that can accommodate 4 slice of bread naturally.

The point here is that if you just want to toast 2 slices of bread for your breakfast, they go for a regular slot toaster. They are not just cheaper to procure, they also use far less energy.

On the other hand, if you want to toast a higher number of slices at a time and at the same time have the luxury to reheat pizza, frozen snacks, bagels and much more, then toaster ovens make more sense.

At 4 slice, or higher, size category, the toaster ovens are more energy efficient as compared to regular slot toasters.

Here we talked comprehensive about how many watts does a toaster oven use. A toaster oven consumes anywhere between 1100-1875 Watts of power with the average ranging at about 1400-1500 Watts.

The higher the power rating, the hotter the toaster oven runs, which in turn translates to quicker cooking and heating.