In normal circumstances, a chicken pepperoni pizza with extra cheese cooks with a bake time of around 10-12 minutes in a regular oven and 8-10 minutes in a convection oven.

Imagine if the same size of pizza with an equal amount of toppings can cook in less than 5 minutes?

A quick-oven, as the name suggests, is a powerful and a high speed oven that cooks much faster than a normal oven.

In this article we will look in depth into what is a quick oven, its types and its uses.

Do You have a Busy Cooking Schedule?

If you have a busy commercial or home kitchen, then you will understand time is always of the essence, and maintaining savory food quality is key.

Some of the key aspects that will help you to make a subjective decision on choosing kitchen appliances that fit your needs include the number of times you cook, amount of meal served per time, size of your kitchen, and the speed at which the food needs to be served.

For example, if you are running a commercial kitchen, delay in serving food can scare time-conscious customers.

A quick oven can be the solution to such predicaments.

What is a Quick Oven?

A quick oven combines multiple cooking energies, depending on the model you chose.

The energies can include microwave, radiant, air impingement, convection, or even contact heating.

The quick ovens are about as diverse, and you can prepare almost anything from cooking chicken breasts and wings, french fries, shrimps, to toasting bread and sandwiches and baking pizzas and cookies.

Typically, they are sophisticated programmable ovens that cook almost anything.

Due to their size, efficiency and power, quick ovens are most suitable in quick service areas such as bakeries, restaurants, bars, schools, hospitals and sandwich shops

Generally quick ovens combine two or three of the cooking methods below to rapidly cook the food. 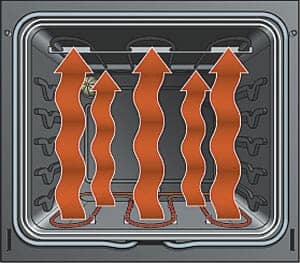 Emanates from the heating elements.

This is the most common and the most easy to understand.

Basically, the heating elements located on the top and bottom of the oven radiate heat which cooks the surface of the food.

There is nothing fancy going on in this type of cooking method.

Convection is one of the most common type of quick oven. Convection ovens come are similar to typical ovens with heating elements but have a built in with a fan that circulate the hot air in side the chamber thus speeding up the cooking process.

It offers a general cavity airflow, which is less direct to the food but cooks more evenly.

Foods cooked through convection heating have a perfect finish of crispy brown outside and a moist inside like in case of toasted bread and baked potatoes.

Convection feature is found in both home and commercial options.

Also Read: What is a Convection Toaster Oven?

Also referred to as forced air cooking, impingement functions more as convection cooking but it is relatively fast and more direct to the food.

Impingement jets are more precise than those of convection; hence the heat penetrates your food efficiently, and you can cook more precisely.

These devices are among the fastest ovens. They are large, bulky and expensive and therefore mostly suited for commercial bakeries and kitchens. 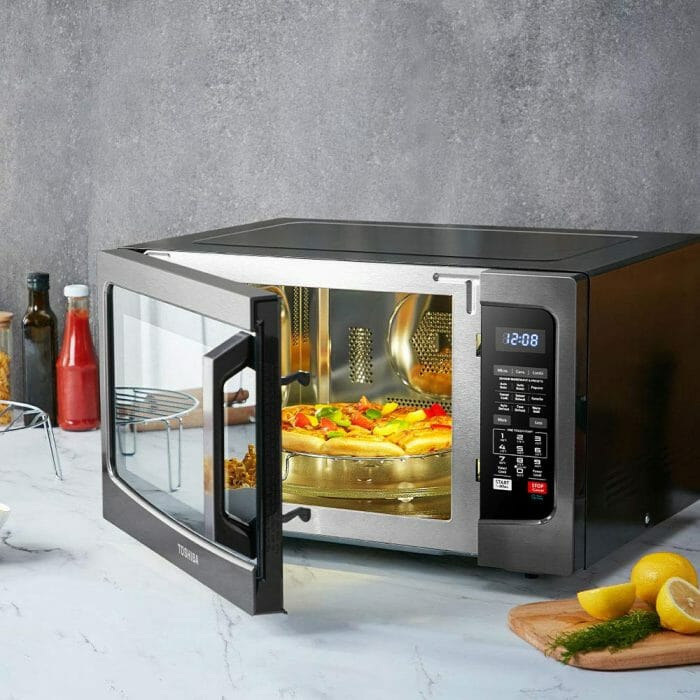 Microwave oven itself is yet another fairly famous cooking appliance in a kitchen. However. a quick microwave oven combines both microwave heating as well as other cooking methods such as convection, impingment etc

There are specific ovens built on the infrared cooking principle. You can find both home and commercial models.

Infrared can be combined with other cooking principle like convection to quicken the process of heating.

To further learn about what is a quick oven, let us review some of its traditional features. 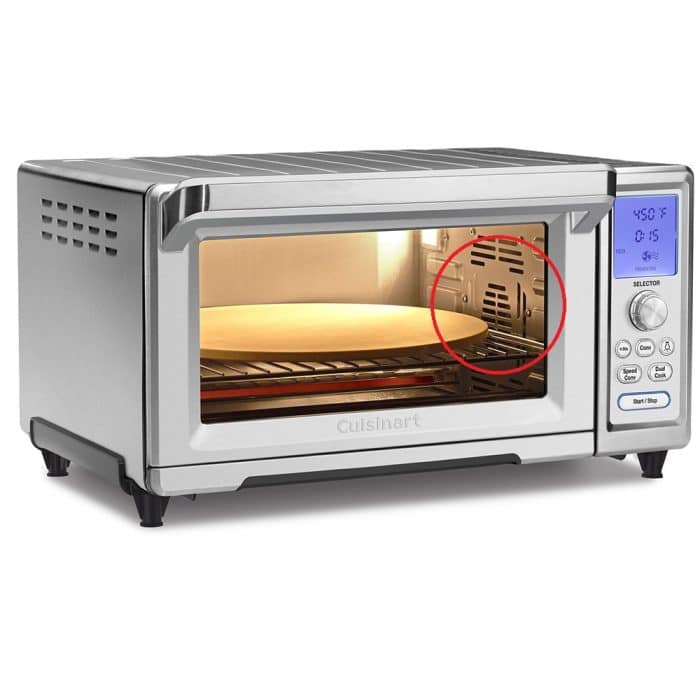 Convection Oven with the fan highlighted in the Red Circle. Combine radiant heat and convection cooking principle. The most common type of relatively ‘quick oven’ for home use.

The most common is a convection oven found in many households.

But there are many more types found in both household and commercial spaces such as those that combine microwave with convection cooking methods, convection with infrared, or a combination of three cooking methods including microwave, impingement and convection.

Turbo Chef C3 is an example of a Quick Oven that combine Microwave Impingement Radiant Heat principles. Has a Wattage Rating of 7400W

So with the increasing issues of limited kitchen spaces with increasing menu options, these quick ovens are more crowd-pleasers as they maximize performance with limited space.

The more the powerful quick oven is, the faster it cooks and more energy it consumes.

Quick ovens consumption ranges between 1-3kW for home use and above 7kW for commercial use.

Temperatures vary depending on the type of the oven but range between 150-500 degrees Fahrenheit.

The power rating also depends on the amount of heating principle used, the size, as well as the temperature it is being operated on.

In most quick ovens you can customize the settings for your cooking style. For example, you can turn off the convection feature in a convection oven if you want it to function as a regular oven.

Similarly, in a microwave convection oven, you can switch between the two or have them both turned on at the same time.

Also Read: What is a Smart Oven?

Oven doors, which is a rare consideration while purchasing a quick oven, are relative to the services they offer. Most high-speed ovens have drop-down doors to allow easy access.

However, some might have side-opening doors, which is preferred if the oven is stacked. Some models also have windows to allow viewing of the cooking cycle.

Automatic loading and unloading is another useful feature in high-speed ovens as it further improves your speed in busy situations.

This is generally found on very large scale ovens found in bakeries. It isn’t readily available on home quick ovens.

Does Having a Quick Oven Make Sense in a Home Kitchen?

It does make sense to have a combination of cooking methods such as microwave with convection oven. This is especially true if need to serve food quickly most of the times.

However, such appliances are generally more expensive than their single cooking method counter parts i.e standalone microwave or a standard lone convection oven.

If you want to transform your restaurant, pub, or a kiosk into a food preparation powerhouse, then a quick oven will give you the boost.

Besides its high power rating and a higher price tag, a quick oven is an essential equipment for any restaurant be it a small home run kitchen or a large enterprise.