What is Heating Element Made of? Learn Here

Several household equipment like an electric oven and an electric kettle need to produce heat. For this reason, they need a heating element. If you’ve been wondering what is  heating element made of then you have come to the right place.

Basically heating elements are made of nichrome, metal alloy or ceramic compounds. The material is chosen based on its high heat and electrical resistance.

Heating elements come in different shapes and sizes depending on the particular thing that they are built for.

They can be small enough to fit into a jug, just like an immersion heater, and some can be large enough for some industrial applications.

Despite their sizes and profiles, most heating elements are typically made of the same things. You will generally need the component with high resistance that generates the heat, something to make the external surface and insulating material to protect the element.

Most heating elements are made like this so let’s see it in more detail.

Also Read: Why is My Oven not Heating Up Properly?

What is a Heating Element?

A heating element is a device that converts electrical energy that’s passed through it to thermal energy. That simple.

The process through which this conversion occurs is known as joule heating and it is responsible for many useful home appliances.

The process utilizes the characteristic of conductors known as resistance. As an electrical current gets transmitted through the conductor, heat is generated and after a short time, the heat is enough to serve its intended purpose.

What is Heating Element Made of?

A heating element is made of several parts that serve an important role in ensuring the device generates the required heat without suffering significant damage itself.

One of the most common heating element types is the metal heating element. It is made up of an alloy of nickel (80%) and chromium (20%) that together care known as Nichrome.

This metal alloy was created more than century ago by Albert Marsh and is still in used today after several iterations of refinement.

Combining the two elements makes for an alloy that has a high resistance and is hence suitable for heating elements.

Because the resistance is the most important factor for generating heat from an electric current, a high resistance means greater heat yields

Nichrome is great not only because of the high resistance it has, but also the high melting point. You wouldn’t want a heating element that always heats up to the point of melting itself. That would be catastrophic and not affordable in the long run.

With a melting point of about 1400O C, Nichrome is ideal for use in high-temperature environments. It’s also very resistant to oxidation that can damage the material.

Nichrome is quite malleable so it can be easily shaped and bent and when heating up it does not expand too much thus exerting little pressure on its surface. 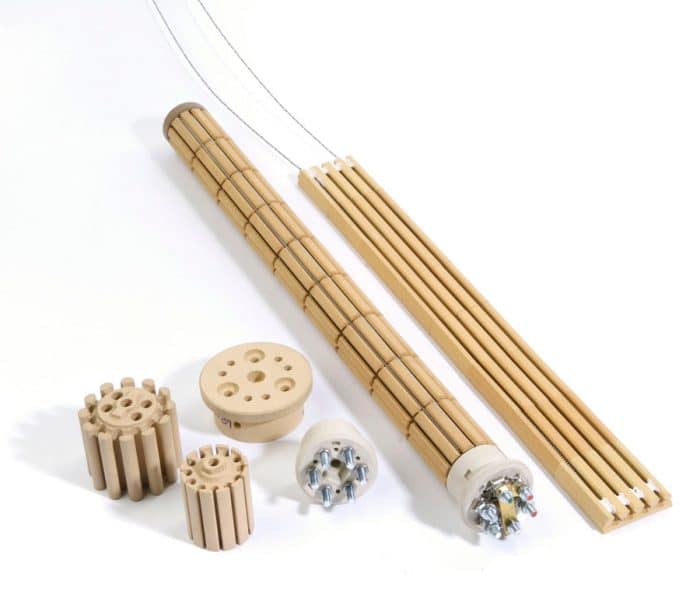 While the principle is still the same, electrical resistance of current passing through a body produces heat, ceramic materials operate a little differently in that as temperature increases, the resistance of the materials also increases.

As such, at a certain threshold, they have a limiting property that doesn’t allow them to get too hot. Therefore, such an element is great for applications where a constant temperature needs to be maintained.

Also Read: How to preheat a toaster oven?

Ceramic heating elements are quite responsive and as a result, they warm up quite fast. Also, because of their positive thermal coefficients, they act as their thermostats.

Resistance increases with an increase in temperature so past some temperature value they won’t be able to get hotter.

Therefore, they will usually display a lower surface temperature, thus reducing the risks of accidental burns and fires.

They are also very durable. 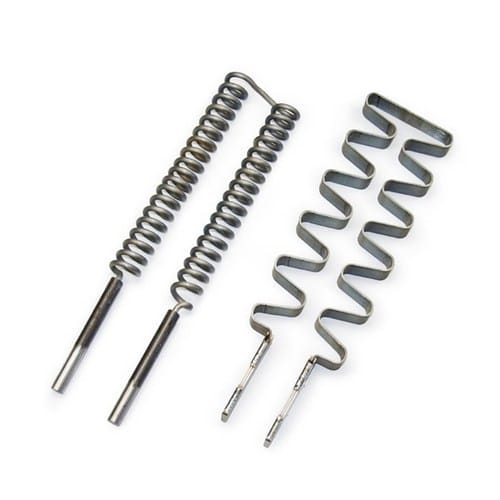 Another group of alloys that is used in heating elements is Kanthal. They are composed of iron, chromium, and aluminum and they have applications in a wide range of settings.

Kanthal heating elements create an aluminum-oxide layer on their surface that protects the, from oxidation. Besides, they have a higher melting point than that of Nichrome, about 1500O C.

Kanthal is very strong but still flexible enough to be bent into various shapes. It can be found in simple home appliances like toasters to heaters for electric cigarettes.

Heating elements can be made up of a wide variety of materials like some alloys of iron. Others use metals like platinum because it is very malleable, has a high melting point and high resistance.

Their composition and form will depend a lot on the purpose of the heating element as well as the amount of energy it is required to generate.

As we have seen, ceramic or PTC elements do not produce a lot of thermal energy. They are self-limiting since at high temperatures, resistance increases.

With heating elements like those found in small appliances like hair dryers, small heaters, kettles, a thin resistive wire is wound inside an outer metallic casing.

The wire is what generates the heat just like a filament in older electric bulbs used to.

For the device to operate well and not burn out, sometimes an insulating material needs to be added to the construction to make sure that the heating element works well.

Property of a Heating Element

In order for a material to qualify as a heating element to be used in appliances, it has to have the following properties:

Another important factor is temperature coefficient of resistance.

The material needs to have a low coefficient of resistance so that it can achieve higher temperatures easily.

The higher the temperature of coefficient of resistance, the more difficult or the more energy it will be needed to reach the certain temperature.

With most heating elements, there are usually some specific properties that people look out for. The material needs to be fairly resistant to corrosion, have a high melting point, and have high resistance.

Now that we have seen what is heating element made of, we have a great idea of how these devices work and how some are composed.

They may come in various shapes and sizes, but for most of those used in household appliances like ovens, the construction usually follows the same principle. A metal tube encasing a resistance wire and some insulating material for protection.

1. What is the heating element in an oven?

The heating element is an integral, easily replaceable component of many electric ovens and ranges. These parts create the heat needed for baking and grinding – they get their job heated as electricity flows through them.

2. What is heating elements made of?

3. How hot do heating elements get?

The oven heating elements can get very hot, sometimes reaching up to 1000 degrees Fahrenheit. This heat is necessary to bake food properly, so it is important to be careful when working near them.

4. Can a heating element shock you?

Yes, a heating element can shock you if it is not properly insulated. You should always use caution when working with heating elements to avoid being shocked.

5. How do I know if my oven heating element is broken?

1. The Heating Element Isn't Bright Orange.
2. The heating mechanism Has Signs of Wear.
3. Food is not cooked or is cooked partially
4. You may noticeably increased your electric bill.

Braun Food Processor Review | How Effective and Versatile is It?

Braun Food Processor Review | How Effective and Versatile is It?